The U.S. Real Estate Market Is Now Worth $30 Trillion

What a difference five years make…a new report from Zillow revealed that the national housing market ended 2016 worth a whopping $29.6 trillion.

It’s now January 5th, and based on how things are going, it’s probably safe to say we’ve eclipsed the $30 trillion mark, or are close to it…I say that semi-jokingly.

Last year, the total value of the U.S. housing stock increased $1.6 trillion, marking a 5.7% increase over the previous year.

The $29.6 trillion figure is a new record high, though it is only expected to go higher this year as homes continue to gain in value, despite the prospect of higher mortgage rates.

The housing market has now recouped the $6.4 trillion lost between 2006 and 2012 when the bubble burst.

Interestingly, had the housing bubble never occurred home prices would actually be higher than they are now, but chances are we’ll overshoot rational pricing again during this cycle.

The big question is how much more upward momentum there is before things begin to cool down, or potentially recede. 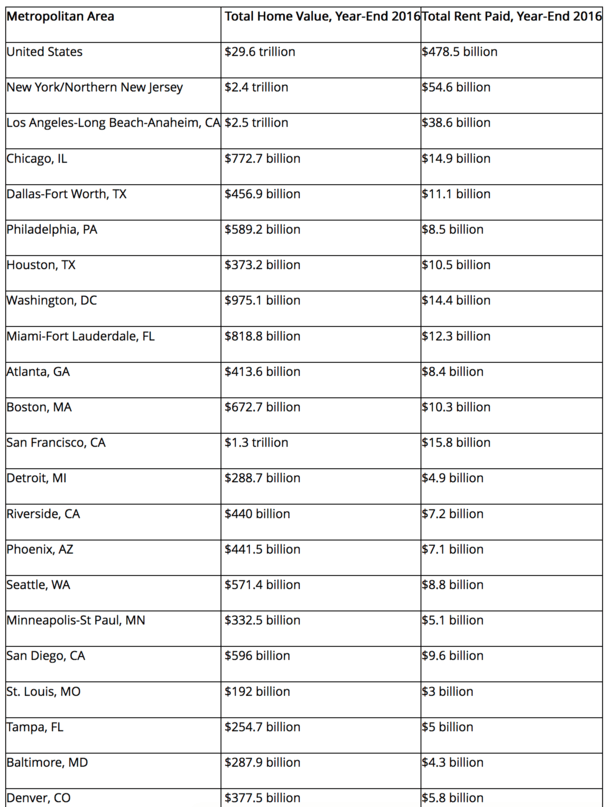 Everyone knows real estate is expensive in LA, but who would have thought the total housing stock in metropolitan Los Angeles would be worth $2.5 trillion?

That makes it the most valuable metro in the nation, likely thanks to the sprawling landscape and number of homes in the vast area.

It also accounts for a staggering 8.6% of the country’s overall housing value.

It was followed closely by New York/Northern New Jersey, with a total value of $2.4 trillion. Rounding out the top five in terms of total value were San Francisco ($1.3 trillion), Washington DC ($975.1 billion), and Miami-Fort Lauderdale ($818.8 billion).

Homes tend to be priciest in San Francisco, but there just aren’t as many of them.

The NYC metro represented about eight percent of total U.S. real estate value, followed by San Francisco, with 4.2 percent of the overall value.

In other words, roughly 21% of the value of the U.S. real estate market is contained in just three metros, LA, NYC, and SF.

Obviously, price swings in these expensive metros can sway the national number quite a bit, which is why it should always be taken with a grain a salt.

They’re all smaller metros relative to the others on the list and also tend to have cheaper homes available.

The biggest year-over-year gainer was Portland, which saw an annual value increase of 13.4%, which is shockingly strong. No wonder they don’t want Californians buying their homes.

Despite the impressive gains seen over the past four or five years, 60% of metropolitan markets nationwide are still below the peak valuations reached during the bubble years.

One example is Chicago, where homes are still collectively worth $134 billion less than the highest value reached back in 2006.

That means there are still opportunities out there to get a home for a historically low price, though the bargains seem to be long gone. And housing will just get more and more expensive for Americans, likely pricing out families as rates and prices rise in tandem.

Despite housing’s popularity, some 635,000 new renter households were created in 2016, increasing the total dollar amount paid despite a slowdown in rent appreciation.

In the New York/Northern New Jersey metro alone, nearly $55 billion was spent on rent last year, the most of any area in the country.