Assuming you actually needed to be told, Quicken Loans (aka Rocket Mortgage) was the top residential mortgage lender in the United States last year.

The company funded roughly $314 billion in home loans during what was a record year for many mortgage companies thanks to record low mortgage rates and an uptick in home purchases.

That handily beat out runner up Wells Fargo ($267 billion), which until recently had been the #1 mortgage lender in the country for many years.

Coming in third was United Wholesale Mortgage (UWM), which funded an impressive $183 billion despite only operating on the wholesale level with mortgage broker partners.

Rounding out the top five were Chase with $149 billion and Freedom Mortgage Corp. with $122 billion.

While interesting, I wanted to know which companies were performing best in each state, or simply who the top mortgage lenders were in say California or Texas or New York.

Thanks to 2020 HDMA data parsed and organized by Richey May, I was able to see which states were top in all 50 states and the District of Columbia.

Rocket Easily Outpaced Its Competitors on a State-by-State Basis

Aside from being the top mortgage lender nationally, Quicken/Rocket was also the leader by total number of states with 19, along with the District of Columbia.

That was a truly impressive figure, as no other single lender claimed double-digits.

In fact, only one other company came even remotely close, San Francisco-based bank Wells Fargo, with nine total states.

It drops off quite a bit from there, with United Wholesale Mortgage and U.S. Bank both mustering just two state “victories” each.

The rest were claimed as one-offs by 18 different banks or mortgage companies, which shows that the mortgage industry is still quite a bit fragmented.

Of course, not all states are created equal. 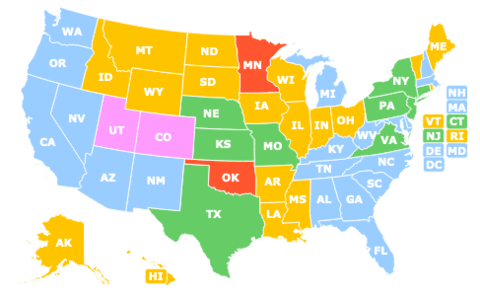 California alone accounted for 21% of residential mortgage volume nationwide, and surprise, surprise, Quicken/Rocket was the winner there.

They also claimed several other big lending states such as Arizona, Florida, Georgia, and Washington.

Not to mention Maryland, their home state of Michigan, Nevada, North Carolina, Oregon, Tennessee, and several others.

And in many cases, Quicken/Rocket was still the second or third strongest presence if it didn’t win the state outright.

Ultimately, they dominated pretty much everywhere other than the Midwest and some parts of the Northeast.

This explains their near-third of a trillion dollars in total mortgage volume last year, which easily beat out its closest competitors Wells Fargo and UWM.

Speaking of Wells, its biggest wins were New York and Texas, along with New Jersey and Virginia, both of which do a fair bit of volume.

Quicken/Rocket’s crosstown competitor UWM scooped up two wins, Colorado and Utah, which happen to be situated right next to one another and not too close to their headquarters in Pontiac, Michigan.

U.S. Bank was the only other two-state winner, claiming its home state of Minnesota along with Oklahoma.

The rest were a mixed bag of mostly regional banks and credit unions, which shows many homeowners and home buyers continue to prefer to work with local companies.

As you can see, everyone other than Quicken/Rocket Mortgage has its work cut out if it wants to get anywhere close to the top, an aspiration recently expressed by both UWM and loanDepot.

It’ll also be interesting to see if Quicken/Rocket can snag even more states in 2021, perhaps more than half if it continues on its winning way. But that remains to be seen…

Here are all 50 states and D.C., along with the winning lender and its volume in the corresponding state.

*Quicken Loans officially announced a name change to Rocket Mortgage earlier this year that will take place over the summer.

previousWhy It Could Be a Great Summer for Mortgage Rates
nextAmerican Pacific Mortgage Review: A Leader in Diversity