Trulia Bubble Watch Reveals Most of California Is Overvalued

Talk of another housing bubble is not new. In fact, pundits have been fretting about another bubble for over a year now thanks to rapidly rising home prices, with Las Vegas and Phoenix already considered to be bubble markets.

That’s the problem with good news – eventually the pessimists come out and somehow turn it into bad news.

No National Housing Bubble, Yet…

On the national level, the company believes home prices are still undervalued, although not by much.

During the first quarter, they said national home prices were 5% undervalued, which means we aren’t in a nationwide bubble.

However, one quarter ago national home prices were 6% undervalued, and a year ago they were 10% undervalued.

So you can see how quickly we can go from undervalued to overvalued, and eventually to full-blown bubble status.

But with home price appreciation finally moderating, we might be able to buy a little more time before the sky falls again.

For the record, national home prices reached a bubblicious high in the first quarter of 2006, when they were 39% overvalued, before crashing to a low of 15% undervalued in the fourth quarter of 2011. 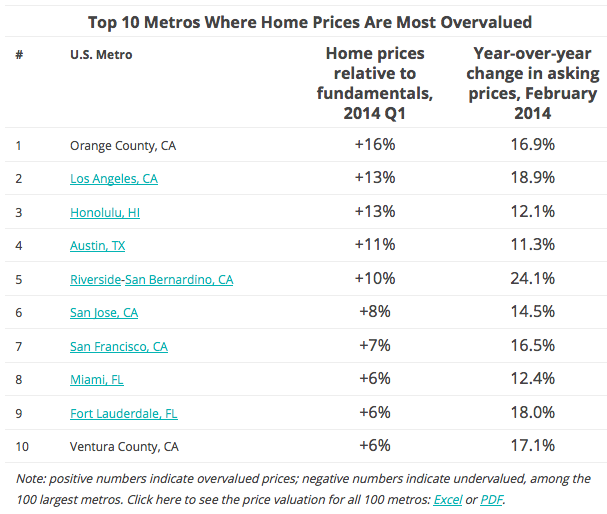 That’s the national outlook, but what about local housing markets? Well, those are a mixed bag, per usual, though there is growing concern in some regions, namely California.

During the first quarter of 2014, 19 of the largest 100 metros were classified as overvalued. That’s the highest number since the fourth quarter of 2009.

Additionally, home prices were overvalued by more than 10% in four large metros, the highest total since late 2009.

Still, it’s nowhere near as bad as the height of the previous boom when all 100 metros were overvalued, with a staggering 91 by more than 10%.

Let’s talk about the new bubbles, all of which happen to be in my neck of the woods. The worst one is in Orange County, California, aka mortgage central.

Home prices in the OC were 16% overvalued relative to their fundamentals in Q1 and asking prices were up 16.9% year-over-year.

Los Angeles, CA wasn’t far behind, with prices seen as 13% overvalued in the first quarter. Asking prices were up 18.9% year-over-year, so clearly homeowners aren’t shy about asking for a little bit more.

The Golden State is decidedly bubbly, with eight of the 11 largest metros in California now deemed overvalued, with Bakersfield, Fresno, and Sacramento the lone exceptions.

Where Homes Are Still Pretty Cheap 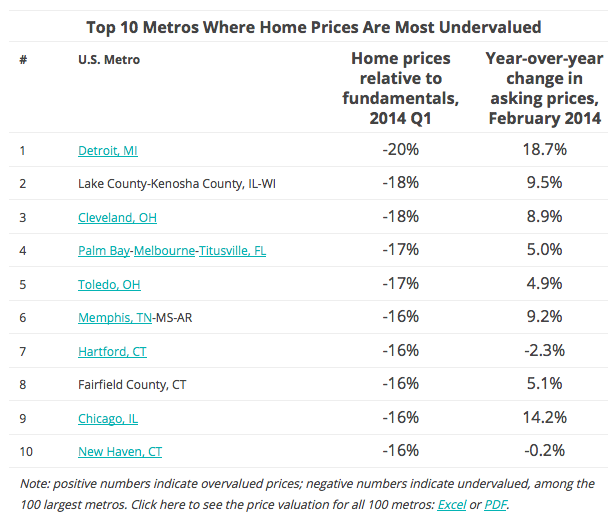 If you’re looking for a deal, there are still places where homes are cheap relative to their historic norms.

Nearby Lake County-Kenosha County, IL-WI is also having a sale, with homes 18% undervalued, similar to homes in Cleveland and Toledo, Ohio.

If you’re not a fan of cold weather, head south to the Palm Bay-Melbourne-Titusville, FL metro where prices are 17% undervalued.

Comparable discounts are available in Memphis, Hartford, Chicago, and certain parts of Connecticut.

The takeaway is that a normal housing market will always have areas that are overvalued and undervalued, which is why the experts say to pay attention to your local market, and less so the national story.

And you certainly need to “go local” when determining if it’s the right time to buy or just keep on renting.

In the meantime, let’s enjoy the recovery.  We can all start worrying when home prices in every major metro are overvalued (or at least half of them), which they clearly are not.