Trulia Chief Economist: May Be Reaching Housing Plateau, Not a Bubble

The fact that we were talking about a potential bubble a couple years ago, before home prices notched even more double-digit gains, might give some prospective home buyers pause.

But are things different this time around, despite the massive increases in prices since things bottomed in 2012?

Well, Trulia chief economist Ralph McLaughlin spoke to Bloomberg about the current state of the housing market and seems to think we’re not entering bubble territory, but rather climbing toward a plateau.

His exact words in the interview were, “I don’t think we’re in a bubble. We may be reaching a plateau.”

If you’re wondering what the distinction is, just picture both items. A bubble grows larger and larger and eventually pops because it’s so unstable.

A plateau is one of those tabletop rock formations you’ll find out in Arizona that’s elevated but flat. It’s not going anywhere fast, but it is high up in the air. Of course, it’s got a pretty steep drop on either end, so I don’t know how comforting the analogy is.

In a less literal sense a plateau can defined as a period of calm following a period of activity or change.

McLaughlin equates a plateau to a “slow soft landing,” as opposed to a bubble popping dramatically. Perhaps a realization that prices are too expensive for most folks, leading to a price cut. Not an outright market rout.

Why It’s Different This Time

The Trulia economist goes on to describe the current state of lending, which is quite a departure from the stated income and no doc stuff seen before the last crisis.

These days, we’re talking QM loans that are fully documented with maximum DTI ratios of 43%. Back then you could choose your own adventure, and your occupation and salary. Lenders didn’t seem to care, nor did Wall Street, so prices kept on rising until it became clear we had built a massive house of cards.

McLaughlin added that many of these borrowers shouldn’t have even owned homes to begin with, implying that they only did because of the faulty underwriting in practice at the time. Today, it’s a lot more difficult to send a shoddy mortgage through the pipeline.

However, he did utter some rather ominous words, saying, “Those days are over.”

To me, that just screamed foreshadowing, you know, that moment when you think everything is hunky-dory before it all comes crashing down.

Now I don’t think we’re quite at that point, but we’re certainly heading in that direction. And eventually lenders will ease credit standards to accommodate higher home prices…it’s inevitable.

In the meantime, if you do believe we’re entering some kind of plateau, it could still make sense to buy a home, or at least hold your current one because rent is just so darn high.

McLaughlin sees home prices moderating in the next few years as we get further along in the current cycle – instead of gains of 10% year-over-year, we might expect to see 5-10%, or even just one to five percent gains. 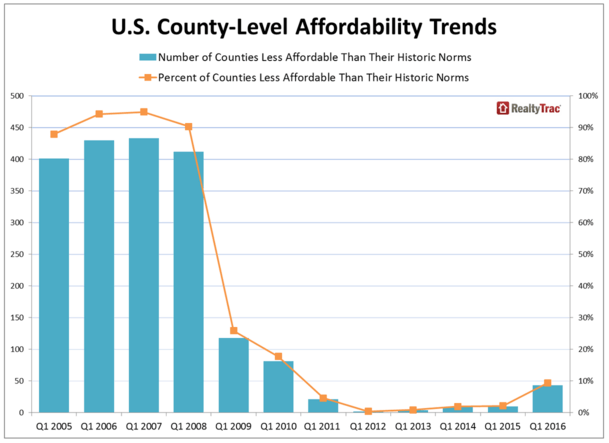 The problem is that it’s still next to impossible to find a home to buy. Nationally, starter home inventory is apparently down nearly 50%.

In hot spots like the Bay Area, it’s down a staggering 70-80%. In other words, it’s next to impossible for a first-time buyer to land a home unless they move to the outskirts, or if home builders step up their game.

The same trend can be seen in the move-up market, making it difficult for existing owners to upsize as they grow their families.

Despite this, homes are apparently still quite affordable, per a new report released today by RealtyTrac. The company noted that it’s trending in the wrong direction, but still relatively reasonable historically.

During the first quarter, just nine percent of U.S. housing markets were less affordable than their historic norms, a big jump from two percent of markets a year ago.

Just check out the chart above to see where we’re at. I will say that’s it’s easy to pretend everything looks dandy when you compare it to the crazy levels seen in 2006 and 2007.

The most affordable counties by historic standards can be found in areas of Boston, Baltimore, Birmingham, Providence, and Chicago.

At the peak of the previous housing bubble in the second quarter of 2006, 454 of the 456 counties analyzed (more than 99%) by RealtyTrac were less affordable than their historic norms.

At this juncture it’s only 43 counties. So maybe it is a plateau. I’m just worried about that cliff on the far end of it.

Read more: When will the next housing bust take place?

2 thoughts on “Trulia Chief Economist: May Be Reaching Housing Plateau, Not a Bubble”

previousGet Up to One Million Credit Card Miles When You Apply for a Mortgage with Capital One
nextCash Out vs. HELOC vs. Home Equity Loan