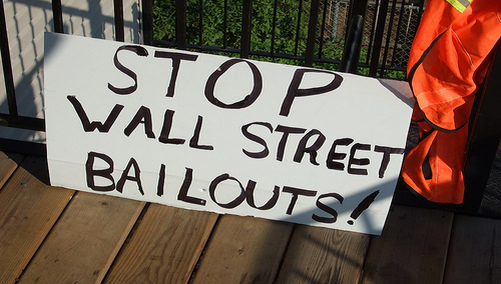 The Mortgage Bankers Association convened in San Francisco this week for its 95th annual convention, an event marked by protests and angry sentiment from passer-bys.

Interestingly, Freddie CEO David Moffett responded to the question, noting that measures used in the past weren’t viable, but said they still needed to figure out a way to assist homeowners on a case-by-case basis.

Outside the event, protesters could be seen holding signs saying, “Honk if you hate Mortgage Bankers!” and “Jail them, don’t bail them!”

Meanwhile, ordinary citizens walking by the event who spoke with San Francisco Chronicle reporters attributed the mortgage crisis to greed, arrogance, and incompetence, among other things.

Inside, things weren’t much rosier, as MBA chairman Kieran Quinn said we are currently experiencing the “most painful deleveraging in the history of finance.”

The Chronicle noted that attendance continues to plummet at the annual event, with only 2,500 guests at this year’s conference, down from 4,000 last year and 5,500 in 2006.

And just 774 exhibitors are presenting their wares this year, down nearly fifty percent from the 1,336 seen last year.

I suppose it makes perfect sense, with mortgage applications down considerably from last year’s dismal numbers and delinquencies and foreclosures continuing to inch up.

And with tickets for the event ranging between $950 and $2,250, you could understand why attendance is plummeting.