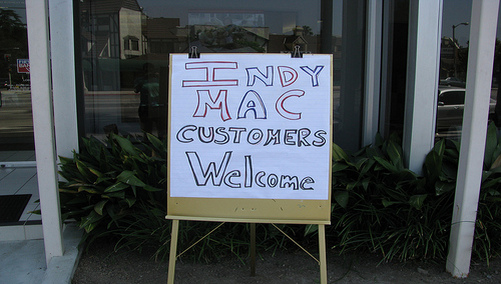 The other day, a friend and I went down to Indymac to close out his savings account, as the massive bank run line had now substantially subsided.

When we arrived, we were greeted by a man in a vest with a clipboard who asked if we were there to make a withdrawal.

Once my friend explained that he was indeed there to withdraw his savings, he was put on a short waiting list and told to sit in a specific area within the bank.

I suppose they wanted to create some semblance of calm that all was well at the failed bank and mortgage lender, despite the panic that had ensued in earlier days.

After withdrawing the cash, we walked about 20 feet and came across First Bank, which had the sign you see above in front of their building, luring ex-customers to quickly redeposit their newly homeless funds.

This seemed to be quite a reversal to what we had been hearing days earlier, that banks such as Washington Mutual and Wells Fargo were placing holds on checks or perhaps not even honoring them.

While this likely created a second wave of panic, supposedly these banks have been placing longer holds on Indymac checks as a measure designed to catch fraudulent activity.

Obviously there will be some winners and losers that emerge from this unprecedented mortgage crisis.