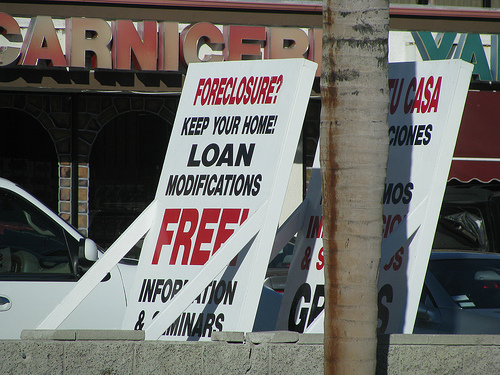 Proposed legislation that would allow bankruptcy judges to modify the terms of mortgages on primary residences could reduce foreclosures by 20 percent, according to a report from Credit Suisse.

The investment bank’s analysts believe that if such legislation were to become law, it would prompt banks and lenders to step up loan modification efforts.

Of course, true foreclosure prevention depends on how much mortgage lenders are willing to budge, considering many borrowers are well underwater, even with a sizable principal reduction factored in.

It’s hard to believe many borrowers will stick around unless they have at least some amount of home equity, and with prices continuing to slide, that task is becoming increasingly difficult.

By the way, the average foreclosure in California now has $180,000 in negative equity.

Opponents of a so-called mortgage cram down, such as the Mortgage Bankers Association, believe it will lead to interest rates one-and-a-half to two points higher, making homeownership that much less affordable.

They also believe it would make it more difficult to accurately appraise property values, and lead to higher down payment requirements and closing costs.

Second mortgage holders would also likely see their positions disappear in the event of a bankruptcy proceeding, spelling trouble for these types of lenders and investors.

But sentiment has shifted in recent months, with the National Association of Home Builders even pulling a 180 in support of such a bill in their latest bid to stem foreclosures and buoy home prices.

Currently, bankruptcy judges are allowed to modify the terms of second homes and even yachts.