Notices of default, the first step in the foreclosure process, fell 4.2 percent in the first quarter compared to the linked quarter and 40 percent year-over-year in the Golden State.

Normally this would be exciting news, but with all the foreclosure moratoria and loan modification programs in effect, it’s hard to tell if this is really good news.

Add to that the fact that it takes mortgage lenders more than a year to issue a foreclosure notice, and you wonder if things are really improving.

Oh, and last year’s numbers were the highest in DataQuick’s stats going back to 1992, and the quarterly average is 44,041.

The recent low was 12,417 back in the third quarter of 2004, when home prices were appreciating at around 20 percent annually.

“We are seeing signs that the worst may be over in the hard-hit entry-level markets, while problems are slowly spreading to more expensive neighborhoods,” said John Walsh, DataQuick president, in a release.

For example, zip codes with median home sale prices of $500,000-plus saw mortgage defaults rise 1.5 percent last quarter, while homes priced under $500,000 saw defaults fall 5.8 percent from the prior quarter.

“We’re also seeing some lenders become more accommodating to work-outs or short sales, while others appear to be getting stricter about delinquencies. It’s very noisy out there.”

On primary mortgages, homeowners were a median five months behind when the mortgage lender filed the NOD, owing a median $14,066 in back payments on a median $330,147 loan amount.

Most of the loans that went into default in the latest quarter were originated during early 2007. 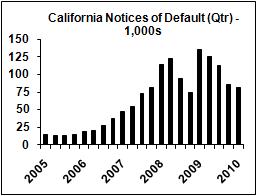