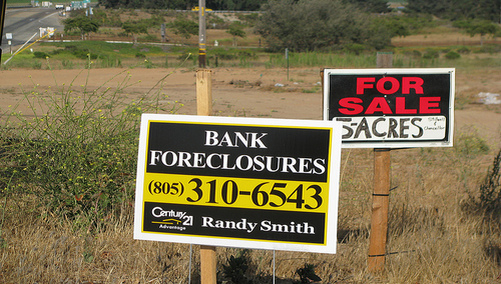 Mortgage defaults in the Golden State dropped 24.3 percent in the fourth quarter compared to a quarter earlier, but were still 12.4 percent higher than a year ago, according to DataQuick.

A total of 84,568 Notices of Default (the first step in the foreclosure process) were recorded between October and December, compared to 111,689 in the prior quarter and 75,230 in the fourth quarter of 2008.

On primary mortgages, California homeowners were a median five months behind on payments when the lender filed the NOD, owing a median $13,510 on a median $325,818 loan amount.

The company said the drop in defaults may be the result of shifting market conditions and/or changing foreclosure policies among mortgage lenders and loan servicers.

In other words, it’s not necessarily a sign of a housing recovery.

“Clearly, many lenders and servicers have concluded that the traditional foreclosure process isn’t necessarily the best way to process market distress, and that losses may be mitigated with so-called short sales or when loan terms are renegotiated with homeowners,” said John Walsh, DataQuick president, in a release.

Countrywide (5,588) originated the most loans that went into default last quarter, followed by Wells Fargo (3,482) and Washington Mutual (3,460).

A year prior, the comparable number was just 66 percent, so at least they’re not adding as much to the inventory glut. 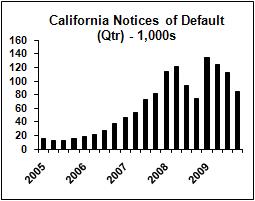