Notices of Default (NoDs), the first step in the foreclosure process, fell 2.2 percent in the first quarter to 68,239, according to analytics firm DataQuick.

Late mortgage payments were down 15.8 percent from the 81,054 seen in the first quarter of 2010 and hit their lowest point since the second quarter of 2007.

“Lenders and servicers have put various temporary holds on foreclosure filings while they work on procedural issues and respond to regulatory and legal challenges,” said DataQuick president John Walsh, in a release. 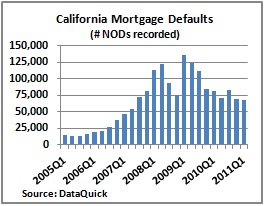 The median loan origination quarter for the defaulted loans continues to be the third quarter of 2006, when inflated home prices, weak underwriting, and risky loan programs such as the option arm were prominent.

California homeowners were a median six months behind on their mortgage payments when the mortgage lender filed the NoD, owing a median $15,818 on a median $323,667 mortgage.

For home equity loans and lines of credit (second mortgages), borrowers owed a median $4,076 on a median $67,222 credit line.

previousNew Bill Would Allow Use of Retirement Funds to Purchase Foreclosures
nextFico: Some Homeowners 110 Times More Likely to Strategically Default than Others