Lowermybills Dancing Alien Ads Are Back! 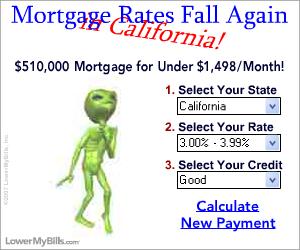 Dancing aliens rejoice. The ads are back. Apparently dreams do come true sometimes.

A few weeks ago, a blogger from the New York Times had commented that the silly dancing aliens, grooving silhouettes, and freaked out office worker advertisements had mysteriously disappeared from websites across the Internet.

The omnipresent, mostly obnoxious ads were part of a mortgage campaign by LowerMyBills, an Experian company that specializes in lead generation, including the lucrative home loans space.

Their disappearance was attributed to the ongoing credit crunch, and their relative popularity (or perhaps notoriety) was clear when the company began cutting back on online advertising geared toward mortgages.

A LowerMyBills company spokeswoman denied any such cutbacks, but said it was possible for the company to shift ad spend from time to time to other segments of their business, such as comparison shopping.

Many fretted that the mortgage lead business was on the way out after the infamous ads finally disappeared.

Nonetheless, the dancing alien ads are back, and they should be enough to help disgruntled mortgage enthusiasts crack a smile in this down housing market.

Finally, a feel-good story in the mortgage industry. We’ve waited a long time for this.

If you’re not familiar, you’ve probably seen the ads at some point, one where a green alien is doing some kind of Macarena-esque dance, or possibly the “office freak out” where dancing women are suddenly caught off guard.

Though the ads have returned, they seem to have been altered slightly, and I’m not talking about a new set of dance moves.

LowerMyBills was acquired by credit bureau Experian in 2005, and bills itself as the #1 online mortgage advertiser. I wouldn’t doubt it given how ubiquitous they are.

In early 2017, Detroit-based Rock Holdings, Inc., which is the parent company of Quicken Loans and its newer venture Rocket Mortgage, announced that it had signed an agreement to acquire Los Angeles-based LowerMyBills.

Let’s hope they bring the aliens back to planet Earth some time soon!