Half of Americans Don’t Even Know What a Mortgage Is?

A new shock poll (I just wanted to utter that phrase) found that half of Americans don’t even know what the word “mortgage” means.

The findings are based on a survey of 2,000 Americans on behalf of mortgage lender PrimeLending, conducted by OnePoll.

Perhaps more amazingly, 73% of those polled were homeowners, yet many still couldn’t identify the correct definition of a mortgage.

Regarding that definition, it was presented as “An agreement between you and a money lender that allows them to take your property if you can’t repay your loan.”

This was the correct choice from a list of other options, which weren’t revealed in the study details. At least I couldn’t find them anywhere.

Why Do We Call It a Mortgage Anyway? 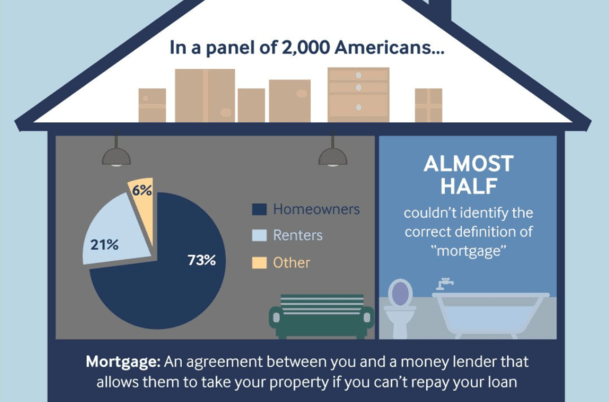 That got me to thinking. Why do we need a special name for a home loan anyway? Why can’t we just call it a home loan?

Well, if we did, I’d need a new name for this blog…but we don’t give special names to other types of consumer loans.

There isn’t a special French word (uttered by Americans) for auto loan or personal loan. And for those wondering, yes, the word mortgage is of French origin.

It essentially means death pledge, in that the loan is terminated when paid in full or repossessed by the lender if not paid as agreed.

Perhaps it has to do with the legal aspects of a mortgage and homeownership, which carry big consequences, as noted.

You can lose your home if you don’t pay your mortgage. But it also speaks to the general complexity and formality of the mortgage business, whether warranted or not.

Yes, owning a home is a very big deal, but why do we always have to make it so complicated?

To the point where consumers don’t even know it means, or feel overwhelmed at the mere sight of the word?

Other Strange Mortgage Misperceptions Were Revealed in the Study

While not being able to define mortgage is pretty egregious, the study revealed even more gaffes.

For example, 41% of respondents claimed you didn’t have to pay back your mortgage if your lender went out of business.

While that would be nice, especially during the mortgage crisis a decade ago (and perhaps now with mortgage lenders shutting their doors again), it’s a clear myth.

Often times, mortgages are transferred to a third-party investor or loan servicer shortly after origination.

So even if your lender were to go out of business, the loan likely isn’t even owned by them anyway.

And if it did stay on their books, it would simply be acquired by another sound financial institution, not just forgiven.

Another 34% of respondents believed it was impossible to change the interest rate on their home loan.

Perhaps they haven’t heard of refinancing a mortgage? It’s actually possible to lower your mortgage rate without refinancing in some cases.

Per usual, there’s not enough focus on financial literacy in this country. And maybe other countries too.

The fact that it’s the American Dream to own a home, but only half can properly define a mortgage seems troubling.

Beyond that, existing homeowners don’t seem to understand how a mortgage refinance works, or even how mortgage rate pricing works.

About a third of respondent also said that when given the choice, they’d rather have a shorter mortgage with a higher interest rate.

This despite the fact that shorter-term mortgages like the 15-year fixed come with lower interest rates in exchange for a faster payoff.

Ultimately, all of this tells me that American homeowners probably don’t make the best real estate or mortgage-related decisions.

Still, nearly half of those polled (45%) said they plan to buy a home in the next three to five years.

Read more: Mortgage Lingo: 23 Terms You Should Know Before You Apply