HAMP Gets Extended for Another Two Years

Today, the Treasury and U.S. Department of Housing and Urban Development (HUD) announced the much anticipated extension of the Home Affordable Modification Program (HAMP).

The program, which was originally launched in March 2009, was set to come to a close on December 31, 2013, but thanks to this most recent extension it will be open to homeowners until December 31, 2015.

Of course, one has to wonder who hasn’t taken advantage of the widely available loan modification program four years after its launch, but I digress.

Since HAMP was launched, more than 1.1 million struggling homeowners have received a permanent modification via the program.

The median monthly savings for borrowers is $546, or 38% of the previous mortgage payment, which is supposedly larger than the median savings with private loan mods, per OCC data.

The total amount saved equates to a whopping $19.1 billion, which ain’t too shabby.

However, more than two million trial modifications were started through HAMP since its inception, meaning nearly half of borrowers couldn’t even keep up with modified payments set to a front-end debt-to-income ratio of 31%.

Additionally, the default data on HAMP loans is pretty bad. If you take a look at the chart above, you’ll see that a good chunk of HAMP loans were either 60+ or 90+ days delinquent in seemingly no time at all.

Sure, the numbers have been getting better over time, but they’re still highly elevated, and one has to wonder if the improvement is more the result of the housing market’s resurgence than anything else.

For example, 41.5% of HAMP loan mods that became permanent in the third quarter of 2009 were 90+ days delinquent after three years.

Conversely, of the HAMP loan mods that went permanent in the third quarter of 2011, just 18.8% were 90+ days delinquent after 18 months.

So the default figures are trending lower, which is a positive for the program that has failed to live up to expectations from the get-go.

Part of that could have to do with an increase in principal reductions, seeing that borrowers will be more hopeful if they actually have a chance of getting above water. 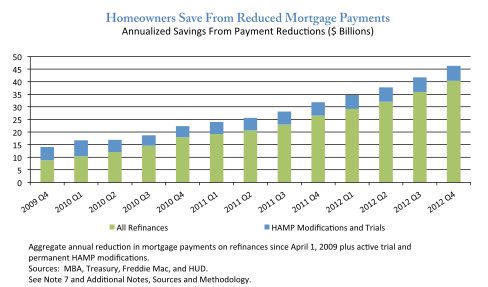 Since April 2009, about 2.4 million homeowners have benefited from a mortgage rate reduction through the program. As you can see from the graph above, HAMP holds a small share of total refinance activity.

Most HARP homeowners hold underwater mortgages, some with loan-to-value ratios well north of 125%, which was the original LTV cutoff.

This program appears to be a lot more successful, seeing that borrowers can snag today’s ultra-low mortgage rates.

Additionally, HARP borrowers must be current on their mortgages, so the success rate is clearly going to be better than HAMP.

One has to remember that HAMP borrowers must have a financial hardship, so even if they default on the HAMP loan, it’s possibly a better alternative to a short sale or foreclosure.

Still, instead of focusing on HAMP, lawmakers may want to actively pursue an extension for HARP, that is, allowing newly originated mortgages to take part, as opposed to just those sold to Fannie and Freddie before May 31, 2009. HAMP has the same eligibility cutoff.

1 thought on “HAMP Gets Extended for Another Two Years”