HARP Refinancing Takes Off Thanks to New Guidelines

As a result of recent enhancements, and perhaps ultra-low mortgage rates, the Home Affordable Refinance Program has actually made a meaningful impact.

Last month, there were a total of 98,885 HARP refinances recorded by the FHFA, which accounted for nearly 24% of all the Fannie Mae and Freddie Mac refis during August.

That’s a big chunk of the business, and represents nearly a quarter of the 400,000 total HARP refis originated in all of 2011.

Last month, a total of 26,944 loans refinanced through the program had a loan-to-value north of 125%, which was one of the major program enhancements announced in late 2011 and implemented in 2012.

Simply put, the program is reaching the hardest-hit borrowers out there, many of whom you would assume are “too far gone” to benefit from such a program, let alone any program.

After all, if you’re underwater on the mortgage by more than 25%, it might be looked at as a losing endeavor, especially if it doesn’t involve any principal forgiveness.

But these numbers show there are believers out there, even in the darkest of times.

And the overall numbers also appear to be picking up. Last month, 99,000 HARP refis were recorded, up slightly from 96,000 in July.

Assuming the numbers held up in September, we’d be looking at quarterly figures around 300,000.

Additionally, the last two months’ totals have also surpassed the quarterly numbers seen in the last three quarters of 2011.

Somewhat amazingly, 18 percent of borrowers with LTV ratios above 105% chose to refinance into shorter-term mortgages, such as 15- and 20-year fixed loans.

In other words, borrowers really believe in their homes if they’re willing to make larger monthly mortgage payments while underwater.

And if they stick with it, they’ll build home equity a lot faster than those who stick with the traditional route.

Of course, one could argue that now is not the time to pay off your mortgage quicker, considering how low mortgage rates are at the moment.

But still, homeowners who do will help the housing market recover faster.

HARP refis were most popular in the sand states of Arizona, Florida, and Nevada, but well below average in high-priced California.

In Nevada, 66% of refis last month went through HARP. The numbers were similarly high in Arizona (50%) and Florida (54%).

In California, just 19% of total refinances were HARP loans.

Lastly, check out this nifty chart (included in the report) that looks at mortgage rates and the level of refinancing activity: 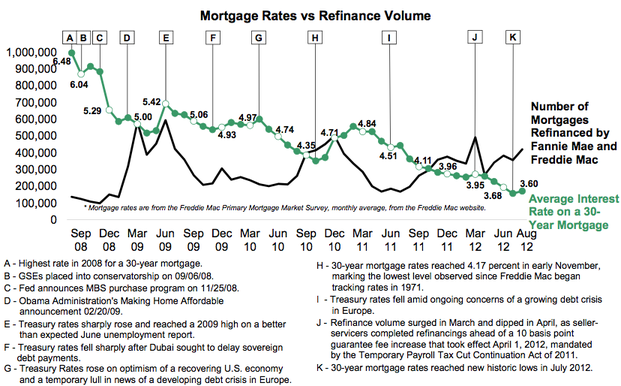 previousAre We Already Running Out of Homes?
nextMortgage Mentioned Just Once During Final Presidential Debate