Loan Origination Fee: What Is It and Do I Need to Pay It?

Loan origination refers to the initiation and completion of the home loan process, which begins when a borrower submits their financial information to a bank or mortgage lender for loan processing.

Depending on documentation type, a borrower will have to supply certain credit, income, asset, and employment information to a specified bank or lender to initiate the underwriting of the loan application.

Along with that, the borrower will have to sign forms that allow the mortgage broker (if applicable) and bank or lender to pull a credit report and release information about the borrower.

Once the information is submitted to the appropriate bank or lender, an underwriter will decision the application, either approving, suspending, or declining the loan.

To sum it up, loan origination is simply the creation of a mortgage. It may begin with a phone call, an e-mail, a mortgage rate quote, or a referral from a real estate agent.

So who’s behind all this loan origination anyway?

Or some other silly name a company comes up with like “loan hero” or “loan scientist.”

These originators may work on behalf of individual mortgage brokers, or for large retail banks that originate thousands of mortgage loans each month.

(See mortgage brokers vs. banks for more on that distinction).

Either way, their main job duty is to get you in the door and persuade you to apply for a mortgage with them, whether it be a purchase money mortgage or a mortgage refinance.

Now this isn’t to say that they’re pushy salespeople, it just means their highest priority is “getting a sale.”

They can also be quite helpful in guiding you through the home loan process, largely because both your incentives and theirs are aligned.

You want your loan to close and they get paid when it does. So everyone is on the same page.

What Is a Loan Origination Fee? 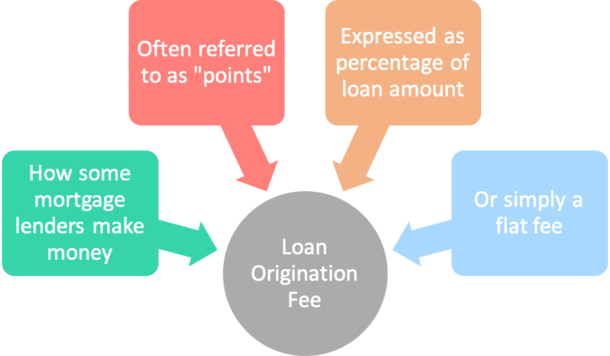 The fee associated with the origination of a home loan is called, you guessed it, a loan origination fee.

They are typically referred to as mortgage points, which are expressed as a percentage of the loan amount.

Conversely, you may see a flat dollar amount charged for obtaining a home loan that isn’t based on loan amount.

This “loan origination fee” is paid to the loan officer or broker who initiates and completes the loan transaction with the borrower, and is only paid out if and when the mortgage loan funds.

The origination fee covers their commission for getting you a home loan, often because they aren’t paid a salary or base pay. And they aren’t working for free.

While we’re on the topic of points, I want to clarify that origination fees and points aren’t necessarily the same.

While origination fees are often represented as points, it’s possible to pay discount points as well, which have nothing to do with commission.

If you want to buy down your mortgage rate, which is totally optional, you’ll pay these discount points at closing.

This could be on top of any commission paid to the originating bank or broker for helping you obtain your loan.

For example, you could pay one point to lower your rate and another point to the bank/broker to cover their commission. In total, you’d pay two points, but for two different reasons.

Are They Just Junk Fees?

The loan origination fee is not necessarily a junk fee seeing that many loan originators don’t get paid salaries, as noted. So they need to get paid somehow.

But some lenders may not charge them and refer to them as unnecessary or excess charges as a result.

However, if they don’t charge you directly, it just means they’re making money a different way, perhaps via a higher interest rate and/or by charging other lender fees.

Certain mortgage bankers can earn a service release premium (SRP) after the loan closes by selling it to an investor on the secondary market.

This isn’t a fee imposed on the borrower directly, though a higher-rate mortgage may fetch a higher SRP.

In any case, someone will be making money for originating your loan, as they should for providing a service.

So don’t get fired up about it, just try to negotiate costs lower as best you can. Or go elsewhere for your loan if you’re not impressed.

The reason it’s sometimes given junk fee status is that it’s often a fixed percentage, which means it’s not necessarily tailored to your specific loan or the amount of time/risk involved.

If these fees were based on a dollar amount instead, skeptics may not consider them junk. Or may think they’re less junky.

A new group of fintech mortgage lenders are often waiving the origination fee and/or not charging it to begin with, which may signal its eventual demise.

Breaking Down the Loan Origination Fee

This is a screenshot of an actual Good Faith Estimate (since replaced by the Loan Estimate), which displays the adjusted origination costs.

This particular broker charged a $250 origination charge, a $695 processing fee, and an $895 underwriting fee, which combined make up the $1,840 total.

Note that these fees are represented as one lump sum on the Good Faith Estimate, so ask for a breakdown to see what you’re actually being charged. Or refer to your Fees Worksheet.

The corresponding Fees Worksheet pictured above breaks down the origination charges so you can better understand what you’re being charged and why.

Although not pictured here, lenders typically display a percentage on the same line as the Loan Origination Fee, such as 1.000%, if applicable. This will give you a better idea as to what you’re actually being charged.

This amount was put toward other closing costs, reducing the borrower’s out-of-pocket expenses.

On the newer Loan Estimate (LE) or Closing Disclosure (CD) forms, you’ll see this information on page 2 of either form under the section titled “Loan Costs.”

There you’ll find the Origination Charges, which may include a flat fee and/or a percentage of the loan amount represented in points.

In this example, the borrower was charged an eighth (0.125%) of the loan amount in the way of discount points and an administration fee of $1,495.

The fraction of a point may have lowered their interest rate slightly, while the so-called admin fee covered typical lender services like underwriting and processing.

In the mortgage world, it’s hard to provide universal answers, seeing that mortgages can differ tremendously.

The loan origination fee can vary based on who you decide to work with, the types of loans in question, and how complicated your loan is.

If you’ve got a cookie-cutter loan that you can get anywhere, this fee should be low.  The opposite is also true.  Either way, the loan origination fee is negotiable!  And it can be offset using a credit, as seen above.

If I had to throw out a number, I’d say the most common origination fee is 1% of the loan amount, which many banks will include in the fine print next to their advertised rates.  Wells Fargo used to include this exact disclaimer on their mortgage rates page, but it has since been removed.

Some banks and lenders may not even charge an origination fee explicitly, though a variety of closing costs such as underwriting and processing could amount to a comparable fee when all is said and done. That’s basically what we saw in the fees worksheet above.


Most types of mortgage loans don’t cap the fees lenders may charge borrowers.

However, many of today’s mortgages, especially those backed by Fannie Mae and Freddie Mac, are so-called Qualified Mortgages, which afford lenders certain protections.

In order to meet this definition, total upfront points and fees may not exceed 3% for loan amounts of $100,000 or more.

This essentially limits what a lender can charge in the way of fees, though it’s still fairly accommodating.

If lenders don’t care to meet the QM rule, they can charge whatever upfront fee they’d like.

The U.S. Department of Housing and Urban Development (HUD) used to limit the maximum loan origination fee to 1% for FHA mortgages, but eliminated that rule for loans originated on or after January 1st, 2010.

The move aligned with changes to the Real Estate Settlement Procedures Act (RESPA), which required the sum of all fees and charges from origination-related services to be included in one box on the Good Faith Estimate (GFE).

However, HUD said at the time that the rule change wouldn’t be a free-for-all for mortgage lenders and brokers to charge whatever they please going forward.

There is still a maximum fee that may be charged on an FHA reverse mortgage, which is the greater of $2,500 or two percent of the maximum claim amount (MCA) of the mortgage, up to $200,000, plus an additional one percent for any portion greater than $200,000.

A maximum of $6,000 in origination fees may be charged on FHA reverse mortgages, regardless of the total loan amount.

And if you’re taking out in a VA loan, a maximum origination fee of 1% remains in place.

Also consider that for smaller loan amounts, a larger loan origination fee will need to be charged, seeing that it’s expressed as a percentage and won’t go nearly as far as a similar percentage on a large loan.

In fact, sometimes the smaller mortgages can be even more a burden to close. So consider the dollar amount as well.

You May Not Be Charged an Origination Fee

Brokers and banks may not even charge a loan origination fee directly to the borrower, depending on the terms of the deal.

A true no cost loan doesn’t include a loan origination fee paid for by the borrower because it’s an out-of-pocket expense.

While you may not pay the fee, your interest rate will likely be higher as a result, all else being equal.

Loan originators have to make money somewhere, so if there is no fee charged on the front-end, they’ll make up for it on the back-end. Or when they sell the loan off to an investor.

As noted, they can earn their commission when they sell the loan off to another company after closing. As such, it doesn’t need to be revealed because it’s not yet known what this figure is.

Either way, all lender fees that are being charged should always be fully disclosed on the Loan Estimate (LE) and Closing Disclosure (CD).

Pay close attention to this figure to see exactly what you’re being charged, whether paid out-of-pocket or via a higher-than-market interest rate.

Most upfront banks and brokers will charge no more than 1-2% of the loan amount, although this can vary by loan amount and by lender.

As noted, not all lenders charge origination fees. I’ve listed several above, but it’s just a sample.

This is especially true with the newer breed of fintech mortgage lenders, many of which charge no lender fees whatsoever.

Some of these companies don’t even use commissioned loan officers, and they rely a lot on technology, so it’s easier for them to waive the fees.

However, you may still have to pay third-party fees, such as title/escrow, appraisal, and prepaid items like interest, property taxes, homeowners insurance, etc.

Be sure to compare the origination charges, all lender fees, AND your interest rate among different banks and lenders to get the complete picture.

Looking at just one or two of these figures won’t provide an accurate assessment as to whether it’s a good deal or not.

If you take the time to shop around, you may be able to avoid the loan origination fee altogether and get that low rate you’re after!