Two weeks ago, I wrote about how mortgage rates jumped, something just about everyone is aware of.

But I also attempted to quantify the actual impact in terms of monthly mortgage payment.

For the typical home, the principal and interest payment went up about 20%, or $230 per month.

Not great news, but not necessarily a deal breaker for well qualified home buyers.

The question now is have mortgage rates peaked, or is the worst yet to come?

Mortgage Rates Have Rarely Moved This Much Higher, This Fast

In other words, the higher they go, the harder it is for them to keep moving higher.

And if they go really high, in a short span of time, they might overshoot the mark, and fall back down to earth.

This is similar to stock market moves, where the market itself or select securities become oversold, or overbought.

Then prices usually rise or fall to reach an equilibrium that traders and the market seem to demand.

In the case of mortgage rates, this falling back down to earth moment has yet to happen, but it could be in the cards.

After all, rates have moved about 1.50% higher since the beginning of 2022, a mostly unprecedented event.

On his blog, he notes that if you look at the 20th century, there were five periods where rates increased by at least 1.5 percentage points on a 12-month basis.

March 2022 Was the Worst Month for Mortgage Rates This Century 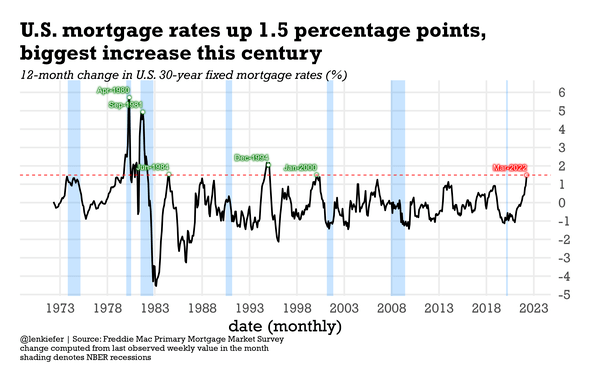 While 30-year fixed mortgage rates have certainly been a lot higher over the years, even as high as 18.45%, they’ve rarely worsened as fast as they have recently.

And though a 4.75% 30-year fixed is actually a pretty decent rate in the grand scheme, it’s much higher than rates were just a few months ago.

In fact, you could have probably gotten a rate below 3% in December or January. No such luck today.

But there might be a glimmer of hope on the horizon. If you look at Kiefer’s chart, there seems to be a relief rally after each big uptick in rates.

Similarly, after rising about two percentage points to 9% in 1994, the 30-year fixed seemed to peak in December and begin erasing that entire uptick in 1995.

So does this mean 2022 is going to follow a similar path?

Will Mortgage Rates ‘Correct’ Over the Rest of 2022?

In other words, it’s not a fluke that prices eventually normalize after a short period of intense one-way movement.

It’s certainly logical, and with much of the bad news from the Fed already seemingly baked in, you could make the argument that we should see some respite.

Even if the Fed has to raise the target fed funds rate several more times this year, mortgage rates could begin to fall.

Since everyone already expects the Fed to do just that, additional factors would likely need to present themselves to force mortgage rates even higher.

It’s not out of the question, but given their rapid ascent, it’s becoming more likely for them to fall rather than go higher.

The problem is banks and mortgage lenders will likely be ultra-cautious, so this relief could be delayed, probably until after the spring home buying season comes to an end.

But the second half of 2022 could reverse some of this year’s damage and align rates closer to their earlier predictions.

previousAre We Near the Peak of the Current Housing Cycle?
nextAllow Me to Introduce You to the 5% Mortgage Rate