Here Are the Many Reasons Why Renters Rent

The whole rent vs. own argument can be pretty polarizing. There are those that liken renting to throwing money down the drain, while others think homeownership is a huge waste of time and money.

The latter group will tell you that home prices don’t even appreciate that much if you consider inflation. Or they’ll warn you about the hidden costs of homeownership like ponying up for a new roof or brand new plumbing.

But it’s not that black and white. There are a ton of reasons why individuals choose (or are forced) to rent, and they aren’t just financial.

The Federal Reserve Bank of New York recently set out to determine why fewer renters are making the transition to owners, and the answers they received ran the gamut.

Yes, Financials Are Most Important 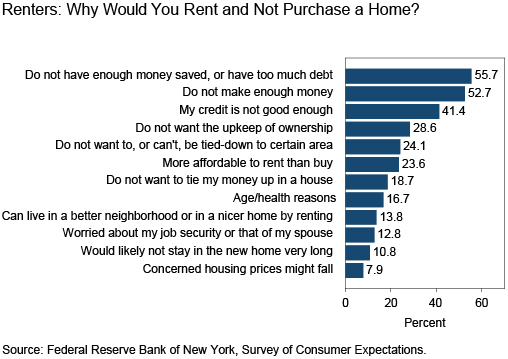 First off, a renter’s balance sheet is certainly a big reason why they rent. The survey indicated that the number one reason renters do not purchase homes is because they don’t have enough money saved and/or have too much debt (55.7% of respondents).

These tend to be the main reasons why borrowers get denied mortgage financing. Either their down payment isn’t sufficient, or their debt is too high, thereby exceeding max DTI ratio limits.

Second on the list was not making enough money, which 52.7% of respondents said was an issue. Again, low income means DTI ratios get exceeded, which can limit or prevent mortgage financing.

Coming in third was the perception that credit wasn’t good enough (41.4% of respondents). But the researchers wondered if respondents weren’t just “discouraged” given the recent crisis.

When it comes down to it, you can get a mortgage with a truly terrible credit score through many outlets, including the VA and FHA.

Others Don’t Want the Responsibility

To illustrate why it’s not just about money, more than a quarter (28.6%) of respondents indicated that they simply don’t want to deal with the upkeep of homeownership.

Yes, owning a home requires a lot of upkeep. Aside from having to know a thing about home maintenance, things will break and require repair. And those things could be very expensive.

There’s also paying the mortgage each month, or worrying about property taxes and homeowners insurance. It’s a lot more involved than simply cutting a rent check each month.

More importantly, you can’t just leave a house. If you want to leave, you’ll either need to sell the thing or rent it out. In either case, it will take work and money.

Perhaps that’s why 24.1% said they didn’t want (or couldn’t) be tied-down to a certain area. And 12.8% said they were worried about job security.

When you own, you might be a little less willing to consider a career change, and a lot more worried about making ends meet. Mobility probably is a little underrated.

And it’s not just you that’s stuck in the home…your money is too. Nearly one in five (18.7%) said they’d rent because they didn’t want their money tied up in a home.

Real estate isn’t liquid. It might be in the future if companies like Opendoor take off, but for now it’s a cumbersome process to buy and sell.

Not Everyone Is Sold on Owning a Home 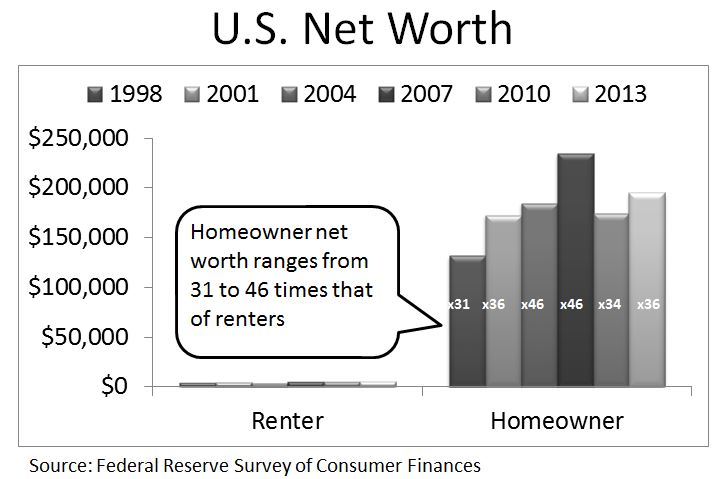 Of course, some simply don’t buy into the whole homeownership thing as a good investment.

Roughly one quarter (23.6%) said it’s more affordable to rent than buy and another 7.9% said they were concerned home prices might fall. Yes, home prices can fall…

Also, 10.8% of respondents said they wouldn’t stay in the new home very long, which reduces the likelihood of making money on the property. Generally you need to stay in a home for several years for it to make financial sense.

Not only that, but 13.8% of respondents noted that they could live in a better neighborhood and/or home if they rented, so why buy?

Well, as the graphic above indicates, homeowners have 36 times the net worth of renters. Put another way, the median homeowner had nearly $200,000 in net worth last year, compared to just $5,000 for renters.  That’s a pretty good argument.