Higher FHA Premiums May Have Priced Out 375,000 Potential Home Buyers

Earlier this week, the National Association of Realtors sent a letter to FHA Commissioner Carol Galante urging her to rethink the agency’s new mortgage insurance structure.

Since 2011, annual mortgage insurance premiums have risen from 90 basis points to 135 basis points in an effort to shore up reserves at the FHA.

Additionally, many borrowers must now pay the annual MIP for the life of the loan, instead of having it fall off once the loan dips to an LTV of 78%.

As a result, NAR believes hundreds of thousands of renters are being priced out of the real estate market.

They estimate that anywhere between 125,000 and 375,000 potential home buyers now have nowhere to turn for financing, with conventional loans also too expensive thanks to PMI and higher interest rates relative to the FHA. 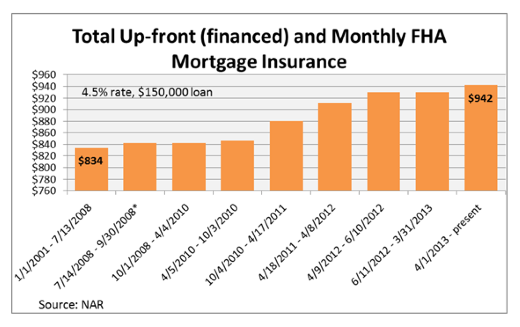 Even with a steady interest rate, FHA loan payments have risen markedly thanks to the new mortgage insurance structure.

The fees alone on an FHA loan account for nearly 20% of the mortgage payment thanks to the rising annual MIP and an upfront premium that nearly doubled from 1% to 1.75%.

Despite these increases, FHA loans tend to be cheaper than conventional loans at high LTVs. So these borrowers are effectively priced out if they have little to put down on a home.

This is a problem because NAR notes that the FHA insured more than half of the purchase-money loans made to African Americans and Hispanics in 2012.

Many of those affected are also the youngest homeowners, who have experienced the slowest income growth in recent years.

To offset this potential roadblock, NAR has recommended that the FHA lower annual mortgage insurance premiums and no longer require that they be paid for the life of the loan.

And full payoffs with no subsequent refinance with the FHA accounted for 81% of the FHA’s prepayments.

Making the desired changes could keep borrowers with the FHA for a longer period of time and boost revenue.

Unfortunately, HUD made these very changes to their mortgage insurance structure to shore up reserves after capital levels fell below acceptable levels.

The FHA also grew far too much in recent years, and the changes they made could help usher in private capital, which has been the goal of policymakers for a while now.

Lastly, if FHA financing is still the cheapest game in town, it might be hard to convince them to change their ways.

2 thoughts on “Higher FHA Premiums May Have Priced Out 375,000 Potential Home Buyers”