What Is a Conventional Mortgage Loan?

Mortgage Q&A: “What is a conventional mortgage loan?”

A “conventional mortgage” simply refers to any residential mortgage loan that is not insured or guaranteed by the federal government.

The word conventional means standard, regular, or normal, which is basically saying that conventional loans are typical and common.

And that makes a lot of sense because conventional home loans make up the largest share of mortgages issued in the United States.

Their counterpart, government mortgages, account for the rest, albeit a smaller slice of the pie.

If I had to guess, I’d say that conventional loans account for about 80% of the residential mortgage market, with government loans the remaining 20%. 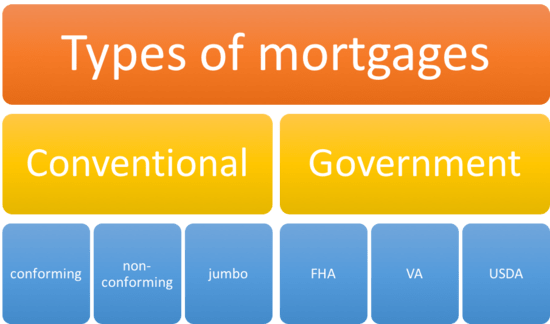 As you might suspect, conventional mortgage loans can be both fixed mortgages or adjustable-rate mortgages, including the 30-year fixed, 15-year fixed,  hybrid ARMs, interest-only loans, and so on.

Basically anything under the sun. They can be used to purchase a home or refinance an existing mortgage.

Additionally, these types of loans may be conforming or non-conforming loans, with the former meeting the standards set forth by government-sponsored enterprises Fannie Mae and Freddie Mac.

However, neither are considered government loans, despite the fact that Fannie and Freddie are under government control at the moment.

This will all become a lot clearer once the pair of companies become privatized in coming months (at some point probably never).

Conventional Loan Is Not Synonymous with Conforming Loan


Be careful not to confuse conventional with conforming, as the two terms can actually be very different, despite being lumped together constantly by lenders and reporters.

Let’s talk about the difference between conventional and conforming for a moment to really let it sink in.

I’ll start by saying all conforming mortgages are conventional, but not all conventional home loans are conforming. Confused yet? Bear with me here.

To answer the first part of that statement, consider that conforming loans are those backed by Fannie Mae and Freddie Mac, which aren’t the government, as noted above.

As for the second statement, there are non-government mortgages that exceed the loan limits allowed by conforming mortgages, making them conventional loans that are non-conforming.

Case in point, the jumbo loan, which is conventional but not conforming due to loan amount.

Jumbo Loans Are Conventional, Not Conforming

Home loans over the conforming loan limit are considered jumbo mortgages and aren’t eligible for delivery to Fannie Mae or Freddie Mac as a result.

There are no conventional loan limits (maximum loan amounts) because they aren’t governed by any particular entity.

So any private sector (non-government) mortgage lender can lend as much as they want to a borrower, even $5 million or more.

And there is no set loan eligibility standard they must abide by either, so underwriting criteria can vary widely.

But if the loans don’t meet the guidelines of Fannie and Freddie, they will often come with a higher mortgage rate as a result.

This has to do with liquidity. It’s easy to sell loans that adhere to Fannie/Freddie underwriting standards because investors know what to expect from the underlying mortgage securities.

Conventional loans can be all over the map in terms of loan amount, down payment, credit score, and general risk. Still, both types of loans are considered conventional because they aren’t government loans.

Additionally, conforming loans have a minimum credit score requirement of 620 and tend to have a max loan-to-value ratio (LTV) of 97%, whereas non-conforming conventional loans may allow lower credit scores and even higher LTVs.

Fannie Mae’s HomeReady is a popular conforming loan program that allows LTVs of up to 97%.

These days, conventional mortgages (whether conforming or not) typically have larger down payment and higher credit score requirements than government loans.

And if the LTV exceeds 80 percent on a conventional loan, private mortgage insurance is usually required by the mortgage lender.

However, conventional mortgages may provide more flexibility because banks can set their own mortgage underwriting guidelines and risk appetite.

Instead of being at the mercy of rigid government or quasi-government guidelines, loan requirements will vary by bank and lender.

For example, if a conventional lender wants to approve mortgages with 500 credit scores, or with zero down, they can.

This is assuming they’re willing to take such risks, because they are private entities that answer to nobody other than having to meet ATR rules.

Government Loans Are Not Conventional Loans

Now let’s turn our attention to mortgage loans that are backed by the federal government, referred to as “government loans,” or “govie loans” for short.

These are considered non-conventional because they’re government-backed. End of story.

So if your mortgage is insured by the government, it’s non-conventional.

Note that I said insured and backed, not actually funded by the government. The government doesn’t make these loans directly, but rather relies on private companies to perform that piece.

The most popular of the government loans is the FHA loan, which is a mortgage backed by the Federal Housing Administration (FHA), an arm of the Department of Housing and Urban Development’s (HUD) Office of Housing.

FHA loans allow for down payments as low as 3.5 percent, but mortgage insurance is required, even if the LTV is below 80%.

Additionally, there are FHA loan limits that dictate how much a homeowner can borrow based on the county in which they reside (or plan to reside).

By the way, the MI you pay on an FHA loan differs from the private mortgage insurance (PMI) that is paid on conventional loans.

The latter comes from a private sector company and has different rules in terms of removal, as well as costs.

The FHA surged in popularity after the mortgage crisis all but wiped out subprime lending, thanks to its low down payment and lenient (low) credit score requirements.

In fact, many suggest that FHA lending essentially replaced subprime lending, though during the housing boom, it was quite the opposite.

Nobody was interested in government loans because private, conventional lenders had the most attractive (aka risky and liberal) loan programs available.

Another common and widely used government home loan is the VA loan, which is backed by the Department of Veteran Affairs.

As the name implies, it is reserved for military and their families, unlike the FHA, which any individual can use if they otherwise qualify.

Lastly, there is the USDA home loan program, which provides 100 percent financing (no minimum down payments) on purchase mortgages to borrowers in rural neighborhoods throughout the country.

In that sense, it has a limited reach as well, making FHA loans the king of the govie loans.

Most Lenders Originate Both Conventional Loans and Government Home Loans

For the record, most mortgage lenders and mortgage brokers originate both conventional mortgage loans and government loans.

Or they may say you have no choice but to go in one direction, thanks to a low credit score or a large loan amount.

FHA loans were quite popular after the housing market took a hit a decade ago, thanks to the low credit score requirement and limited down payment.

But Fannie and Freddie have taken back market share thanks to their 3% down offering and cancelable PMI, coupled with the FHA’s stricter mortgage insurance policy.

If you’re shopping for a mortgage, be sure you know the distinction between these key loan types.

One may be better suited for you for one reason or another, and it’s always good to know all your loan options.

If a lender recommends one over the other, be sure they thoroughly explain how they came to that conclusion.

Assuming you live in a more expensive region of the country (or are simply buying an expensive home for your area), you may no choice but to go the conventional route due to home value alone.