Housing supply was bad before the coronavirus epidemic reared its ugly head, and now it has gotten even worse, per new data from real estate brokerage Redfin.

Homes Flying Off the Market 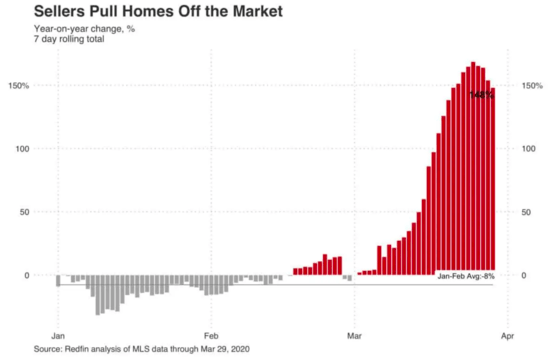 The company noted that home delistings, where home sellers pull their properties off the market, increased 148% during the week of March 29th, compared to a year earlier.

And during that seven-day period, nearly 4% of active listings were taken off the market, which is roughly twice the typical rate.

It was even worse in the cities of Chicago, Los Angeles, and Philadelphia, where 6% of listings were pulled.

All of those hard-hit cities have a shelter in place mandate, so it’s clearly not the best time to sell a home.

Conversely, Atlanta only saw 2% of active homes delisted, which might be related to their lack of stay at home orders until this Friday.

Once implemented, the delisting trend will likely catch up to homes in Georgia as well.

New listings are also taking a hit, with home sellers reluctant to get the ball rolling, for obvious reasons.

And it seemed to hit just as the traditional spring home buying season was beginning to heat up. Talk about bad timing.

Detroit and Philadelphia saw the worst impact, with new listings in both cities down 63% year-over-year last week.

Inventory Down and So Are Prices… 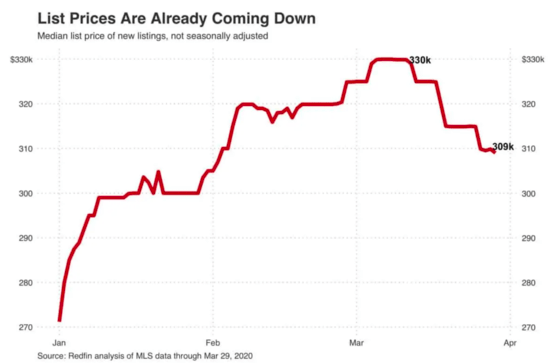 Now here’s the scary part. Usually when inventory, or supply goes down, prices go up. That’s not the case in this unique pandemic-impacted real estate market.

Those stories you heard last week that real estate agents were still closing homes probably reflected the time lag related to the epidemic, and the relatively long escrow period that likely began well before things took a turn.

But now that most states are in a veritable lockdown, we’re going to see the true impact of coronavirus on the housing market.

To make matters worse, a lot of prospective home buyers are likely going to lose interest in buying a home this year, even if things improve health-wise.

And those that are still interested might fall out simply because they no longer qualify for a mortgage, due to unemployment, loss of income, loss of assets, and so on.

The question is how bad will it get, and when will things turn around?

previousGenerate a Mortgage Forbearance Request Letter with This Free Tool
nextHow Do I Know If Fannie Mae or Freddie Mac Owns My Mortgage?