If You Want to Buy a Home, Adjust Your Max Purchase Price Filter a Lot Lower

If you’re a prospective home buyer, you need to prepare for the worst. And by worst, I mean a much higher-than-anticipated asking price.

Maybe not everywhere, but in many major metros nationwide, the real estate market remains red hot.

And there’s really no sign of abating, even with mortgage rates back above 4% and the uncertainty of a war in Ukraine hanging over our heads.

The latest sign that things aren’t slowing down is a report from Redfin that revealed nearly 6,000 homes sold for $100,000 or more above asking.

What’s scarier is that data is only through February 15th, at a traditionally slower time of year for the housing market.

If you thought things were finally going to take a breather, well, they haven’t, at least not yet.

Despite a 30-year fixed mortgage rate that is now above 4% with many banks and mortgage lenders, competition among home buyers remains fierce.

For perspective, that’s up from the 2,421 that sold for that premium a year earlier, a sign of the housing market’s strength as we roll into 2022.

So for those who assumed higher mortgage rates would lead to lower asking prices, it appears the opposite has happened.

As I’ve speculated in the past, higher mortgage rates could act as a catalyst to push some fence-sitters into the market.

After all, if they fear a 5% mortgage rate, they better get moving ASAP to avoid both the higher interest rate and the more expensive sales price.

The other issue seems to be inflation, which is making everything more expensive, even homes.

Simply put, the dollar feels like it’s worth a whole lot less this year than last. So buying power is just not going as far, even with the same dollars.

Los Angeles Metro Has Most Homes Sold for $100k+ Over Asking 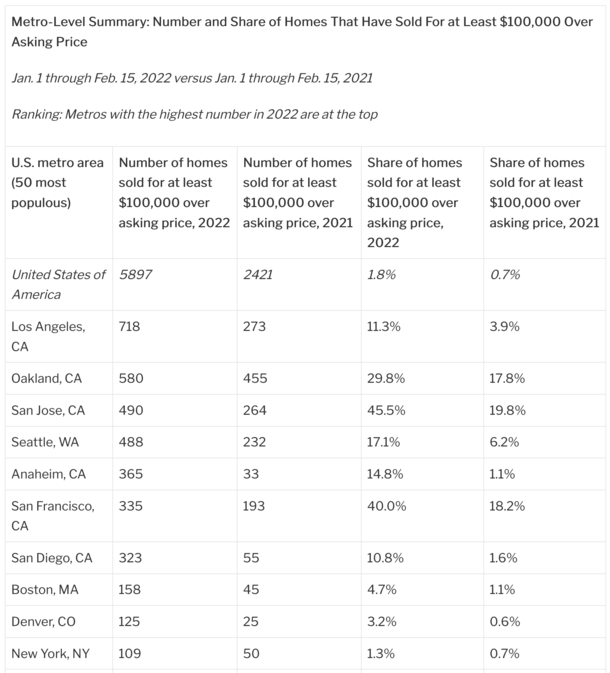 One metro in particular is leading the way when it comes to homes selling way above asking; sunny Los Angeles.

Through February 15th of this year, 718 homes have sold for $100k+ above ask, well beyond any other metro, and much higher than the 273 total a year earlier.

Pretty shocking that more than one out every 10 homes is going for $100k+ over.

In many other metros nationwide, it’s probably not even feasible for a home to go for $100,000 more than the asking price due to lower property values.

The takeaway here is that the housing market is just as hot, if not hotter, than it was in 2021.

And it’s not even the start of the traditionally busy spring home buying season.

Whether this continues remains to be seen, but if I had to pick a side, I’d go with more competitive than last year as opposed to less.

As such, it might be prudent to lower your maximum purchase price in the apps you use to track new listings.

For example, if you set a maximum purchase price filter of $500,000 on Redfin and/or Zillow, based on a mortgage pre-approval you received, you may want to lower it to say $450,000.

That way if and when the property gets multiple bids and goes well above asking, you’ll hopefully still qualify for a mortgage at the higher sales price.

And you’ll actually be able to afford it, and effectively compete with other buyers, even if it goes for a lot more than expected.

If you set your filters with the assumption that the original asking price will match the eventual sales price, you might waste your time (and your agent’s).

You could also be disappointed as home upon home goes for way more than your budget.

This is further compounded by the fact that mortgage rates could continue to inch higher, though hopefully the worst is behind us for now.