Is Mortgage a Good Debt or a Bad Debt? It Can Be the Absolute Best Debt

You may have heard that mortgage is a “good debt,” in that it’s okay to carry a multi-hundred-thousand-dollar loan for decades on end.

While that may sound counterintuitive to the many anti-debt folks out there, such as Suze Orman or Dave Ramsey, there is actually some real truth to it.

Why Mortgage Is a Good Debt 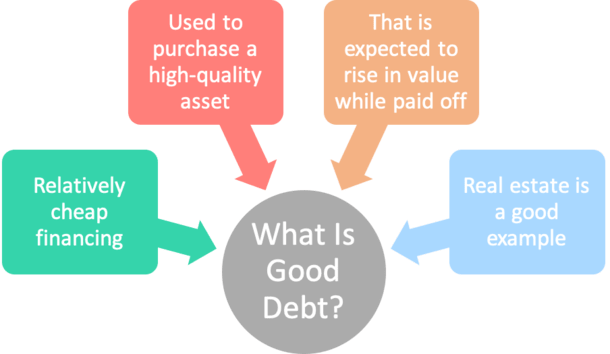 As noted, financial experts tend to agree that mortgage is a good debt. They say this because the underlying property is deemed an “asset,” as opposed to a liability.

For example, a big screen TV that will become obsolete by the time your 36 months of financing comes to an end is a liability.

It doesn’t rise in value during the loan term, and if anything becomes worthless by the time it’s actually paid off.

Conversely, a piece of real estate should rise in value over time if history is any indication. Sure, there might be some hiccups along the way, but home prices do increase as time goes on.

A good example being the homes that were underwater in the wake of the Great Recession, many of which are now worth significantly more than they were in 2008.

Those who stuck with it long-term have reaped the rewards, while those who gave up on their mortgage payments lost out.

But this is an example of how a good debt like a mortgage can go bad if it’s unaffordable, or if the borrower isn’t disciplined.

What Is a Bad Debt? 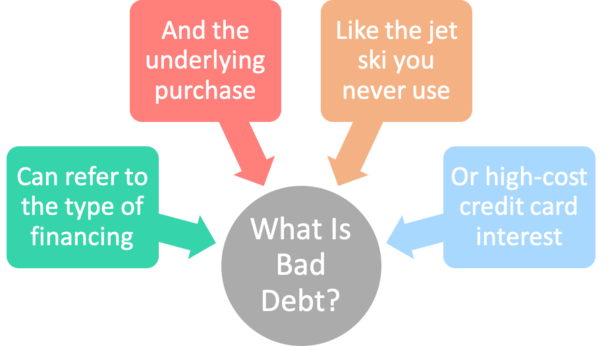 Now let’s talk about “bad debt,” which was alluded to somewhat above.

While good debt is generally used to finance a high-quality asset that provides a lot of utility, the oppose can be said of bad debt.

In other words, racking up lots of credit card debt to buy nonsense items you don’t really need would be considered bad debt.

Not only did you buy stuff you couldn’t afford to pay in cash, you also chose the most expensive financing arrangement out there, seeing that credit card APRs are typically in the teens, 20% range, or even higher.

Of course, we can refer to both the financing or the underlying purchase itself when speaking of a bad debt.

For example, those who took out option ARMs back in 2004 to finance their McMansions that weren’t truly affordable could be seen as taking out bad debt, even though it was a mortgage.

In this case, the house, while perhaps expensive, wasn’t necessarily the culprit.

It was the exotic mortgage type that was called upon because the borrower wasn’t truly qualified to be a homeowner, at least for that particular property.

While the homeowner may have eventually lost the property to foreclosure, there’s a good chance it’s worth a whole lot more today than it was when they purchased it.

So had they used good debt to acquire it, the story may have played out completely differently.

They’d be 15 years into paying off the mortgage, and combined with rising property values, only owe a fraction of what the property is worth today.

In other words, they’d own a good chunk of a quality asset thanks to taking on that good debt all those years.

If they took out a 15-year fixed mortgage, the property would actually be free and clear today, and they’d now be sitting on hundreds of thousands of dollars in available home equity.

To sum it up, a mortgage is good debt because it’s generally cheap financing and it’s going toward paying off an asset that is rising in value.

Real estate is also an inflation hedge and it provides real utility, a roof over one’s head. The same can’t be said about much else, even if the rate of return is higher.

And with mortgage rates at new record lows, one could argue that a home loan has never been a better debt. So why rush to pay it off?

previousKnock Home Swap: Buy, Sell, a Get a Mortgage with Just One Company
nextWhat Is a Gift of Equity? One Way to Buy Your Parents House