Is Your Bank About to Fail? Just Check Their CD Yield 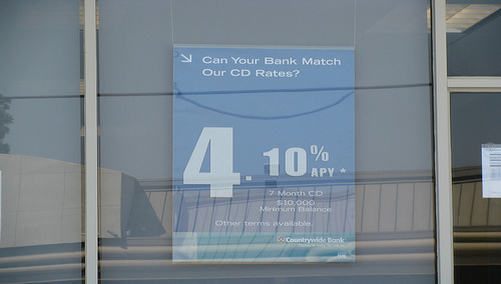 If you’re curious if your bank may be on the brink of failure, just take a look at the yields being offered on their CDs.

Integrity Bank of Alpharetta, Georgia was offering a yield of 5% on a 2 1/2-year CD the day before it was shut down by regulators in August, according to Bloomberg.

The publication also highlighted suspiciously-high yields at banks like Washington Mutual and Wachovia, both of which were recently swooped up after failing and nearly failing, respectively.

It’s for this reason that Wells Fargo expects to lose about 20 percent of Wachovia’s deposits, because it simply won’t match the rate that was being offered prior to the bank and mortgage lender’s demise going forward.

One of the major reasons regulators pushed Wachovia to find a suitor was apparently because the bank was messing up deposit costs all along the East Coast, according to a finance professor who spoke with Bloomberg.

Consider High Yields That Are in a Normal Range

Currently, more conservative entities like Wells Fargo and Bank of America are offering CD rates between 2-3%, though with more players entering the banking fold to grab a piece of the bailout fund, rates may be forced higher.

Regardless, the impact of all these banks teetering on the brink of failure is clear, with net interest margin, the difference between interest paid on deposits and how much is received from loans, flat or down during the third quarter at the half of the nation’s largest 20 banks.

So if you’re questioning your bank’s existence going forward, take a look at their CD rate compared to other leading, healthy (healthier) banks, it may just provide some insight as to their status.

Both GMAC Bank and Flagstar Bancorp, for example, are offering CD yields between 3.35 percent and five percent, well above the national average.

They also happen to be in precarious situations, with GMAC questionable as a going concern and Flagstar stock trading below a dollar.