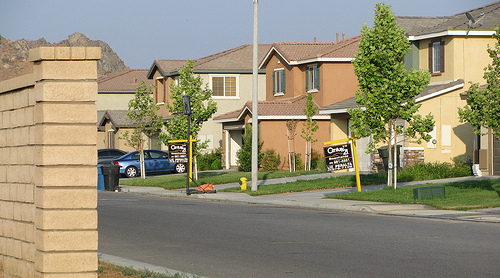 So as you may or may not know, depending on how involved you are in the mortgage/real estate industry, the temporarily inflated conforming loan limits are slated to fall come October.

While that number is still higher than the traditional conforming loan limit, which should be a much lower $417,000, if not less, given the recent home prices declines, it’s still ruffling feathers.

The National Association of Realtors has already lost their sh*t over this, as anything that will possibly hurt the already ailing housing market should be avoided at all costs, right?

NAR’s basic argument is that those with larger loan amounts will have to chase after jumbo financing, which is harder to come by and also more expensive.

Here’s the thing though. A new data dump released by Lender Processing Services (LPS) today revealed that just one (1) percent of loan originations over the past three years would be affected by the loan limit change.

Sure, the number could be skewed some, as most sales over the past three years have been distressed, foreclosures, short sales, and the like, in hard-hit areas where jumbo financing typically doesn’t come into play.

But still, one percent is pretty darn low on a scale from 1-100. So maybe it’ll affect a handful of buyers and refinancers, but not enough borrowers to justify holding the limit in its inflated place.

On the other hand, LPS also noted that so-called Qualified Residential Mortgages could make a huge impact on the mortgage and real estate market.

Their data revealed that nearly half of all loans originated in the United States since 2005 would have been ineligible under the proposed QRM standards.

It’s no surprise really, as the rules are pretty strict. They include 20 percent minimum down payments for purchase-money mortgages, and a staggering 30 percent in home equity for a cash-out refinance.

But those behind the QRM supposedly designed them to pay a small role, so this makes sense.

The problem, however, is the fear that non-QRM mortgages will be priced a percentage point or so higher, which will clearly cause an uproar.

That explains why the same trade groups are opposed to the QRM rule as written as well.

Either way, both these initiatives face major resistance.

Oh, and by the way, the average loan in foreclosure has been delinquent for a record 587 days.

previousA 30-Year Fixed in the 3% Range? Maybe, But Does Anyone Care?
nextWhat Is a Cash-In Refinance? Lower Your Loan Balance and Your Mortgage Rate