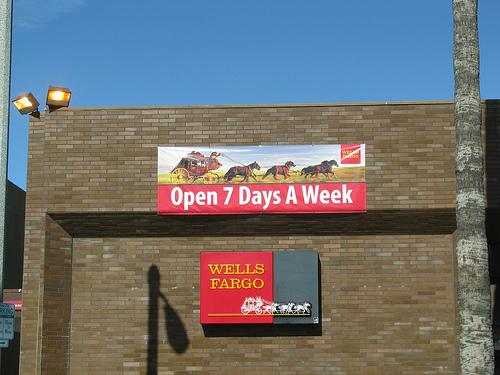 In an effort to “de-risk,”  Wells Fargo took $37.2 billion in credit write-downs on $93.9 billion in risky Wachovia loans along with $1.2 billion in net charge-offs on the company’s Pick-a-Pay loan portfolio.

Additionally, the company’s allowance for credit losses rose to $21.7 billion at quarter-end, the highest coverage of any large domestic bank (and they don’t plan to use any additional TARP funds).

The San Francisco-based bank said last December was the fourth highest home loan application month in the history of the company, which led to a healthy mortgage application pipeline of $71 billion at year-end.

During the quarter, the company saw mortgage applications of $116 billion, up 158 percent from a quarter earlier.

Wells also noted that mortgage application activity was running 20 percent higher in the first two weeks of January than the average daily rate in December, though it’s unclear if that’s a good thing.

During the year, their mortgage market share increased to 12 percent, up from 10 percent a year earlier.

“Home Mortgage’s servicing portfolio continued to perform relatively well given the challenges customers are facing in the current economic environment,” the company said in a release.

“For our largest product category, prime conventional first mortgages, representing 5.7 million customers and over $1 trillion of servicing, 96 of every 100 customers were current with their payments at year-end compared with 97 of every 100 at September 30, 2008.”

Wells Fargo reduced its workforce by 17 percent from 2007 levels, shedding 3,600 positions across all its businesses during the year.