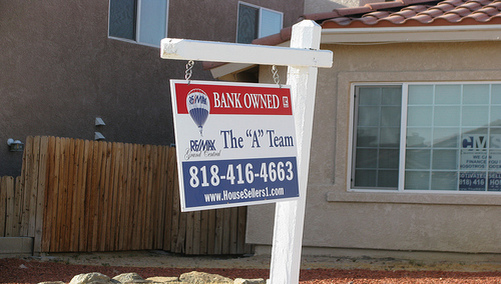 The number of mortgage defaults filed during the third quarter fell 10.3 percent compared to a quarter earlier, according to real estate information service DataQuick.

A total of 111,689 default notices were sent between July and September, an 18.5 percent increase from a year earlier when 94,240 hit homeowners’ mailboxes.

“It may well be that lenders have intentionally slowed down the pace of formal foreclosure proceedings, said John Walsh, DataQuick president, in a release.  “If so, it’s not out of the goodness of their hearts.”

“It’s because they’ve concluded that flooding the market with cheap foreclosures in this economic environment may not be in their best financial interest. Trying to keep motivated, employed homeowners in their homes might be the most cost-efficient way to stem losses.”

Defaults peaked in the first quarter of this year at 135,431, a number DataQuick believes was inflated due to deferred activity from various foreclosure moratoria.

The median loan origination month of last quarter’s defaulted loans was July 2006; a year ago it was June 2006, so the foreclosure process has moved forward just one month over a year.

“There’s a batch of truly nasty loans that were made in mid 2006. There’s another batch made in late 2006. These are worse than the mortgages before and after, and it’s taking a long time to process them,” Walsh added.

However, smaller subprime lenders had much higher default rates; ResMAE Mortgage was at 73.9 percent, followed by Ownit Mortgage at 69.5 percent, and BNC Mortgage at 61.4 percent.

Mortgages were most likely to go into default in Merced, San Joaquin, and Riverside counties, and least likely in San Francisco, Marin and Santa Cruz counties.

California homeowners were a median five months behind on payments, or $12,665 on a median $343,200 mortgage, when the mortgage lender filed a default notice.

Trustees Deeds recorded, or the actual loss of a home due to foreclosure, climbed 9.5 percent to 50,013 from the prior quarter, but were down 37.1 percent from the third quarter of 2008, which was the all-time high. 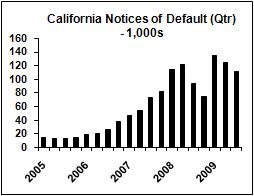 previousMBA Expects $1.5 Trillion in Mortgage Originations in 2010
nextPulte Accused of Selling Homes at Above Market Values