It sounds like we just hit the housing recovery trifecta, all in one stellar news day.

The 30-year fixed fell to its lowest point on record, 3.34%, according to the latest survey from Freddie Mac.

That’s down from 3.40% last week and 4% a year ago, not that those prior high mortgage rates were a roadblock for anyone looking to purchase a home or refinance an existing mortgage.

Then there’s the national mortgage delinquency rate (at least one payment past due), which fell to 7.40% in the third quarter, down from 7.58% in the second quarter and 7.99% a year ago, per the Mortgage Bankers Association.

It’s at its lowest point since 2008, which is surely good news seeing that the world seemed to be ending at that time.

There were also fewer loans in the process of foreclosure at the end of the third quarter, with the rate dropping from 4.27% to 4.07%.

The foreclosure start rate also hit its lowest point since 2007, thanks in part to improved loan modification programs, increased property values, and perhaps better efforts by loan servicers and lenders to explore other options first (or maybe they’re just taking their sweet time to foreclose).

All of this points to a smaller shadow inventory, which is that nasty supply of homes that don’t show up in the officially reported numbers that could keep downward pressure on home prices. 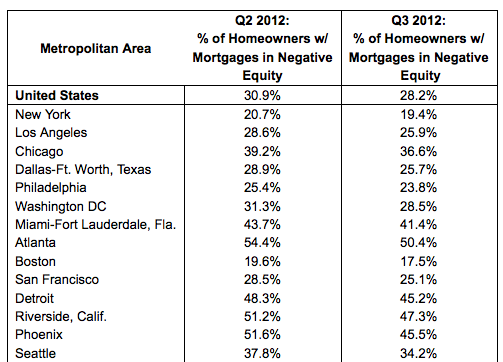 Finally, negative equity has also been dropping like a rock. During the third quarter, it fell from 30.9% to 28.2%, according to the latest Negative Equity Report from Zillow.

Another 1.3 million homeowners were able to get their heads above water during the quarter, though more than 14 million are still unable to breathe.

Still, negative equity levels continue to be downright scary in many hard-hit regions.

In Vegas, 63% remain underwater, and 50.4% of Atlanta residents have no home equity. Not good by any stretch.

Housing Market at a Crossroads

But we remain in a perilous position. The biggest buzzword lately has been the “fiscal cliff,” which is a series of spending cuts and tax increases expected to take place on January 1, 2013 if Congress doesn’t act soon.

At risk is the mortgage interest deduction, along with the special treatment short sales get so ex-homeowners aren’t forced to pay tax on the forgiven amount.

Clearly any major changes to housing initiatives will dampen the recovery. And if the economy at large is hurt as a result of the fiscal cliff, you better believe housing will come down with it.

There are already negative indicators, such as the fact that the housing inventory has shrunk yet home prices are unmoved.

The next six months will be a key period for housing, and hopefully we’ll be able to determine if this recovery is for real, or just another artificial boost set to lose steam before another downward cycle.

Buckle up, it’s going to be a bumpy ride.