You know that awesome refinance you’ve got all planned? The one that’s going to save you hundreds on your mortgage payment every month.

Well, I hope you’re an extremely patient person, because the average time it takes to close a refinance is nearly 60 days, according to the latest monthly loan origination report from Ellie Mae.

The company, which provides mortgage management software, noted that the “days to close” for a refinance rose to a staggering 57 days in October, up from 53 days in September.

All the more reason to ponder the question of whether to lock or float your mortgage rate.

The refinance share also increased to 69% of total origination volume, up from 65% in September. 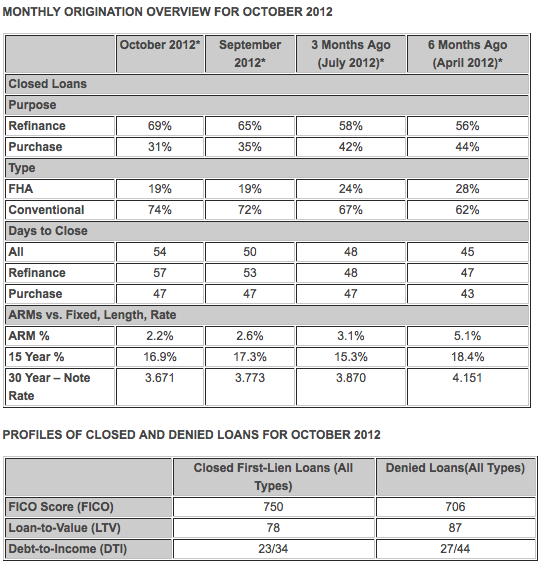 It all makes perfect sense. Mortgage rates are at their lowest point in history, and there just aren’t enough loan officers, loan processors, and underwriters around to handle it all.

Sure, banks and mortgage lenders have hired more employees in recent months, but employment levels in the industry are still much lower today than they were during the boom.

And you better believe companies aren’t about to go on a hiring spree, only to let those same people go after the refinance frenzy slows down.

After all, refinance activity is expected to fall to $785 billion in 2013, down from an estimated $1.2 trillion this year, per the latest Mortgage Bankers Association forecast released last month.

In short, as rates rise, refinancing will come to a crawl, especially since everyone and their mother is jumping on the refinance train now, when rates are at their lowest.

Kind of explains why Bank of America reportedly had a waiting list to refinance earlier this year.

That doesn’t bode well for refinancing going forward unless rates surprise us once again.

While the time it takes to refinance is clearly on the rise, more loans are actually making it to the finish line.

Ellie Mae noted that the closing rate for refinances increased to 51.3% in October, up from 45.3% in September.

It’s the first time the pull-through rate for refinances has topped 50% since the company began tracking the metric in August 2011.

And it was as low as 37.9% as recently as July, so that’s certainly good news. Perhaps HARP 2.0 is helping the cause, with fewer restrictions in place to kill deals.

Higher property values may also be helping, with fewer low appraisals being a burden.

All the refinance activity is also making it harder to close more time-sensitive purchase-money loans, though the day to close hasn’t changed a whole lot in months.

It stood at 47 days in October, unchanged over the past three months, but up from 43 days in April.

The close rate for purchases has also steadily improved, increasing from 55.2% in April to 61.2% last month.

So at least all the hard work originators and banks are putting in is actually paying dividends (and healthy commissions).

In other words, those with really good credit are still missing out on refinancing or buying a home for one reason or another.

Yes, credit is very important, but it’s not everything.

Read more: Do you qualify for a mortgage?