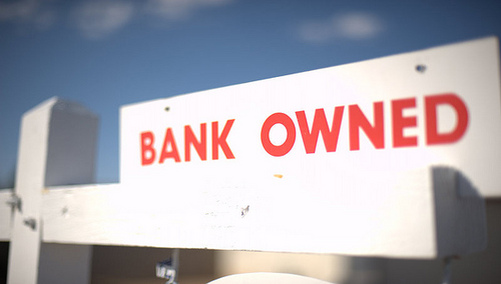 The “shadow inventory,” which is the pending supply of homes not included in the official numbers, increased to 1.7 million units as of September, according to a report from First American Core Logic.

That’s up from 1.1 million a year ago, thanks to rising numbers of real estate owned (REO) by banks and mortgage lenders, foreclosures, deeds in lieu of foreclosure, and mortgages at least 90 days delinquent.

The visible supply of housing inventory, or homes that are actually listed for sale on the market, decreased to 3.8 million units from 4.7 million a year earlier.

The total months’ supply, which is the amount of time it would take to clear all the inventory, fell to 11.1 months from 12.7 a year earlier.

“This indicates that while the visible months’ supply has decreased and is beginning to approach more normal levels, adding in the pending supply reveals there is still quite a bit of inventory that will impact the housing market for the next few years, especially in the context of the current increase in home sales, which is in part due to artificially low interest rates and the homebuyer tax credit,” the report said.

In other words, recent home sales data is a bit skewed, so the inventory will probably take even longer to clear than predicted, once the homebuyer tax credit expires and mortgage rates climb higher.

Check out the nifty charts below to see just how much of an impact the shadow inventory (in yellow) can have on the real estate market. 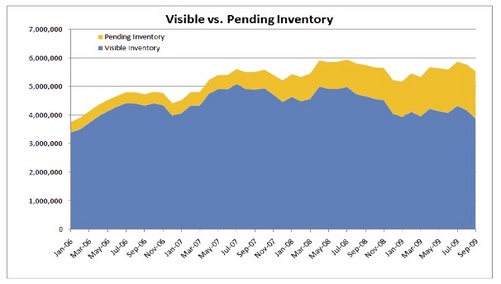 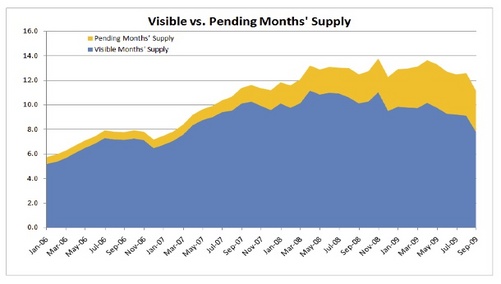 previousCiti Offers Up Foreclosure Moratorium for the Holidays
nextHome Retention Acts Up, But Re-Default Rate Awful