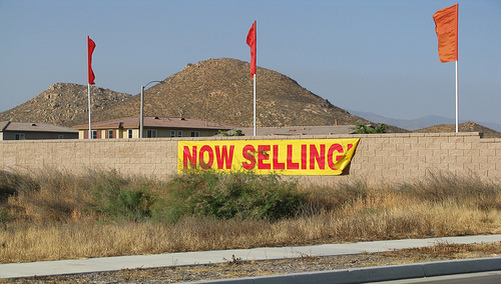 Southern California home prices last month were unchanged from a year ago, the first time there hasn’t been a year-over-year decline since September 2007, according to DataQuick.

The median price paid for a home in the Southland last month was $285,000, a 1.8 percent increase from October.

DataQuick said sales have been pushed higher thanks to the first-time homebuyer tax credit, the record low mortgage rates, and “robust investor activity.”

“There’s still not a lot of discretionary buying and selling outside the more affordable markets. Anybody who can sit tight is doing just that. The market won’t fully rebalance itself until financing becomes available for the higher price ranges.”

Jumbo mortgages accounted for just 15 percent of all home purchases, compared to roughly 40 percent during the housing boom.

Meanwhile, adjustable-rate mortgages were used to finance only 4.1 percent of last month’s home sales; between 2000 and 2005, nearly half of Southland buyers chose ARMs.

FHA loans were used by 38.1 percent of buyers, the same as in October, and up from 34.5 percent a year ago.

Foreclosure resales made up only 39.1 percent of all Southland resales, the lowest total since May 2008; it was as high as 56.7 percent last February.