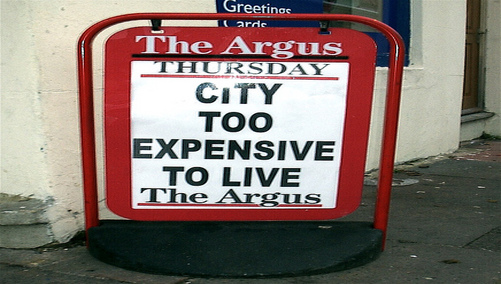 If you’re curious why so many Americans fell behind on their mortgage payments, you need to look beyond the mortgage itself.

Between 1996 and 2006, all major categories of homeowner expenses increased faster than related incomes, according to a new report from the Center for Housing Policy.

During the same time period, homeowner income only increased by 36.3 percent, putting considerable strain on mortgage-holders over the last decade (debt-to-income ratio).

That may explain why mortgage lenders chose to increasingly offer loan programs that reduced monthly payments and offset principal payments, while banking on rapid appreciation to mask any worry of default.

But when home prices peaked, and then began their precipitous fall, it left many with little or no home equity (thanks to all the cash out during those low-interest rate days), which is why we’re seeing so many underwater borrowers nowadays.

Renters aren’t exempt from the pain either, with rents increasing 51 percent between 1996 and 2006, while renter incomes only increased 31.4 percent.

Sprinkle on top of it rising energy costs, including the costs to heat the home and purchase gas, and you’ve got a big problem, one looser underwriting guidelines won’t solve.

Nearly one in six households, or nine million homeowners, and nine million renters spent more than half their income on housing costs in 2006, far above the 30 percent threshold typically deemed affordable.

Prices must come down.