The Number One Reason Mortgages Were Denied in 2018

Hint: It wasn’t because of a low credit score.

Some say a mortgage (homeownership) is a privilege, not a right. In other words, you have to display some financial responsibility in order to obtain one.

After all, a bank is willing to let you borrow several hundred thousand dollars or more for three decades, so they can’t just be given out willy nilly.

Fortunately, we returned to underwriting loans after the latest mortgage crisis, so the quality of loans is once again passable.

Unfortunately, this means some borrowers are being left out in the cold when it comes to getting approved.

But that doesn’t mean these folks have nowhere to turn – in most cases, it’s just matter of taking some steps to correct the issue.

Home Improvement Loans Denied the Most 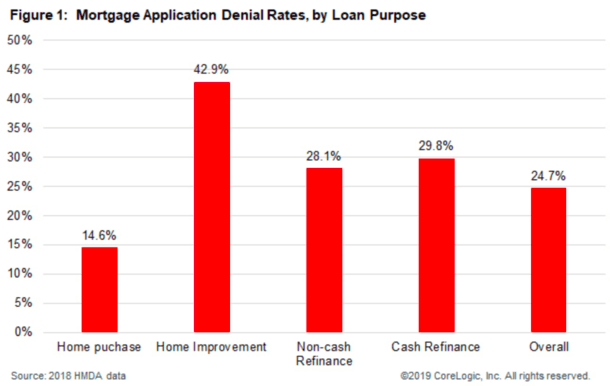 In 2018, an astonishing 2.65 million home loans were denied, which equated to an equally shocking 24.7% denial rate, per CoreLogic, which recently parsed last year’s HMDA data.

As you can see, home improvement loans were most likely to  be denied, with nearly half failing to cross the finish line in 2018.

Both rate and term refis and cash out refis also exhibited high denial rates, at 28.1% and 29.8%, respectively.

Meanwhile, home purchase loans were denied 14.6% of the time, which can be pretty devastating for someone missing out on their dream home.

DTI Is the Main Roadblock, Not Credit Scores or Down Payment 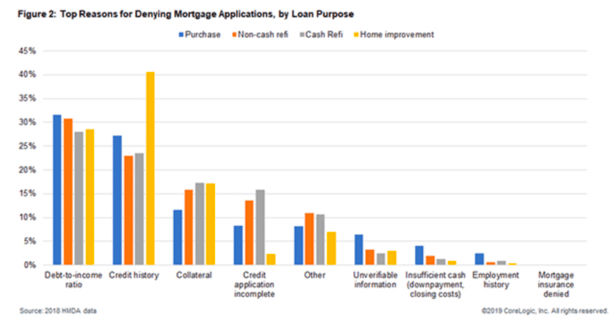 Interestingly, credit scores and down payments were not the culprit, as it often cited in the news and research reports.

Rather, it was debt-to-income ratios (DTIs) that led to the most denials by loan underwriters.

In short, your DTI is your monthly liabilities (bills) divided by your monthly gross income. The lower the number the better, as it means you have more cash available to make a housing payment.

Several years ago, the Consumer Financial Protection Bureau (CFPB) established a dividing line of 43%, with DTIs above that level now facing additional scrutiny.

Meanwhile, cash-out refinances had the highest percentage of DTI exceeding the 43% threshold in both denied applications (55.6%) and approved originations (35.1%).

It is still possible to get approved with a DTI greater than 43%, but the denial rates clearly increase as DTIs climb higher.

So it’s pretty clear that once your DTI exceeds 50%, it gets increasingly difficult to get approved for a mortgage.

Again, it’s not a guaranteed denial, but the odds start to stack against you.

The remedy here is to either find a lender willing to accept a high DTI (perhaps by enlisting a mortgage broker who can shop multiple lender partners), lower your monthly outlays, or simply buy a cheaper house.

Now I mentioned a low credit score wasn’t the main problem, but it was still a significant one.

In fact, credit history was the second most common reason for loan denial, responsible for a sizable 33.9% of denied purchase apps, 37.1% of denied cash-out refi, 27.5% of denied non-cash-out refis, and nearly half (46.7%) of denied home improvement applications.

For the record, more than 70% of home improvement loans were second mortgages, such as home equity loans or HELOCs.

The solution here is simply to take better care of your credit. It’s one thing not to have enough income, but another to neglect your credit scores.

As I always say, credit is the one thing we have control of above all else. Pay your bills on time and you’ve accomplished more than half the battle.

Do you best to keep outstanding balances low and only apply for credit when necessary and you’ll be fine in this department.

Rounding out the top three reasons for mortgage denial was collateral, aka the appraisal coming in low and torpedoing the deal.

To avoid such issues, make sure you’re buying a house that’s properly valued, or have a contingency plan in place if the value comes in low (more down payment money or ability to take out a higher-LTV loan).

Some 9% of purchase apps were also denied as a result of insufficient cash for down payment and/or closing costs.