The Return of Refis, Falling Home Prices, and Negative Equity?

The real estate market is kind of strange at the moment.

Everyone expected mortgage rates to jump in 2019, but so far they’ve done the exact opposite.

At the same time, home price appreciation has slowed in much of the country, creating a situation where affordability is actually better than it was a year ago.

To make matters even weirder, negative equity is increasing again, a topic I haven’t discussed for many years.

Refi Candidates Up 75% From November 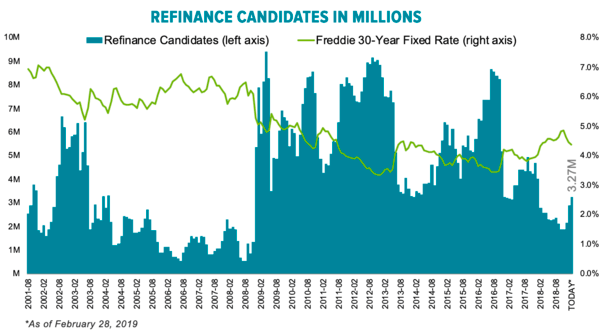 First those refis – amazingly, the number of homeowners who could both qualify for and benefit from a mortgage refinance rose almost 75% from the 10-year low seen in November 2018, per the latest Black Knight Mortgage Monitor for January 2019.

It also marked a 16% year-over-year increase and the highest number of eligible candidates since January 2018.

There are about 3.27 million homeowners today who could reduce their mortgage rate by at least 0.75%, which would obviously amount of some serious savings monthly and over the life of the loan.

However, the numbers are still down a hefty 30% from late 2017 when 30-year fixed mortgage rates stood below 4%.

Sadly, Black Knight believes the impact will be muted because some 85% of homeowners took out their mortgages more than seven years ago, meaning they’re not likely to refinance.

Still, roughly 250,000 homeowners who took out their mortgages just last year could stand to benefit greatly from a refi, especially those who received rates on the higher end of the spectrum due to bad timing and/or bad credit, etc. 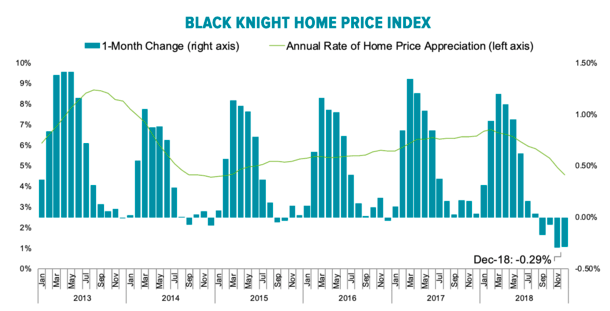 Now let’s address home prices, which after some really solid years of growth, seem to be getting tested.

It could just be an affordability issue, as new home buyers simply don’t have the ability to purchase real estate at today’s relatively sky-high prices.

Certainly, it’s not for a lack of wanting to buy, nor is it an inventory issue – low supply continues to be a problem.

The average home price has fallen a combined 0.82% over the past four months, marking a $2,440 loss.

And Black Knight economists expect the same trend in January based on early data collection.

Now the good news – because home price gains have moderated, and even fallen over the past several months, housing affordability has increased.

A prospective home buyer today needs just 22.2% of their median income to purchase the average-priced home with a 20% down payment on a 30-year fixed-rate mortgage.

That’s slightly lower than the post-recession high of 23.4% seen just a few months back, and well below the long-term average of 25% seen in the late 1990s and early pre-bubble 2000s.

Additionally, despite the recent slowdown, annual home price growth is still outpacing its 25-year average of 3.9%, so if anything, the real estate market is simply normalizing after some really hot (unsustainable) years.

Underwater Mortgages Are Back? 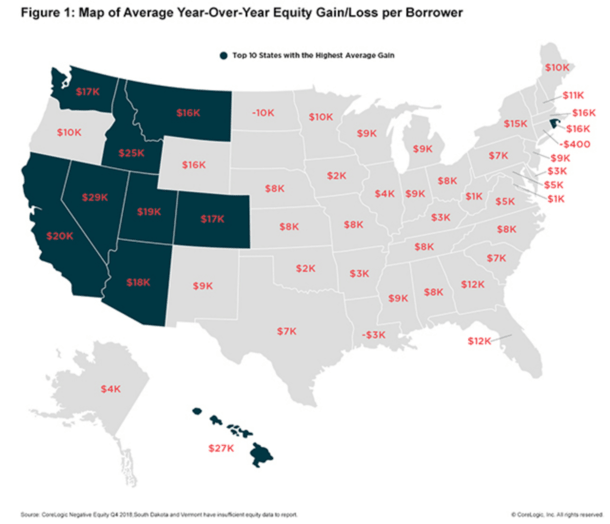 That brings us to the issue of negative equity, something I definitely haven’t mentioned on this blog in a long, long time.

It was a hot topic post-housing crisis when something like half of all borrowers with a mortgage owed more than their homes were worth.

That led to a new definition for “underwater” in the dictionary, the advent of underwater mortgage insurance, and the very popular and widely-used HARP refinance program.

Now Corelogic is telling us that the quarterly increase in negative equity during the fourth quarter of 2018 was the first in four years.

Between the third and fourth quarter of 2018, the total number of mortgaged homes in negative equity increased 1.6% to 2.2 million homes, representing 4.2% of all mortgaged properties.

It was the first quarterly increase since the fourth quarter of 2015, and led to some 35,000 properties falling into underwater positions.

Before we ring the alarm bells, if you consider the year-over-year basis, the number of mortgaged properties in negative equity actually fell by a significantly larger 14%, representing some 351,000 homeowners.

And the CoreLogic Home Price Index estimates a 4.5% increase in home prices from December 2018 to the end of 2019, which should lift another 350,000 homeowners above water.

Still hard to believe that millions remain underwater on their mortgages in light of the massive home price gains realized since the recovery got underway. Tells you how bad things got.

Negative equity peaked at a staggering 26% of mortgaged residential properties during the fourth quarter of 2009. It’s been nearly a decade since those very dismal times.

previousHow to Pay Off the Mortgage Early: 30+ Methods You Can Use Right Now
nextDoes Refinancing Hurt Your Credit Score?