These Six Things Will Happen If Mortgage Rates Go Up

We’ve been worrying that mortgage rates would go up for years now, but it just hasn’t happened yet. Sure, they’re up a little bit from record levels, but not by as much as expected.

The 30-year fixed still sits firmly around 4%, while the 15-year fixed is in the low 3% range. Both have been slightly lower at different points in the past five years.

This prolonged period of low rates has kept the mortgage business humming along while also propelling the housing market to record heights.

But what happens when mortgage rates start to really take off higher? Well, six main things, this according to a working paper by Laurie Goodman over at the Urban Institute.

What goes up will cause something else to go down, and we’re talking about mortgage origination volume.

As rates rise, fewer mortgages will be made because there will be less of an incentive to refinance.

Fannie Mae, Freddie Mac, and the Mortgage Bankers Association all expect mortgage lending volume to decrease significantly from last year to this year. And they anticipate an even slower 2018.

Of course, we’ve been hearing this for years, only to see these groups revise their estimates higher. But they’ll probably be right eventually…

The Mortgage Industry Will Consolidate 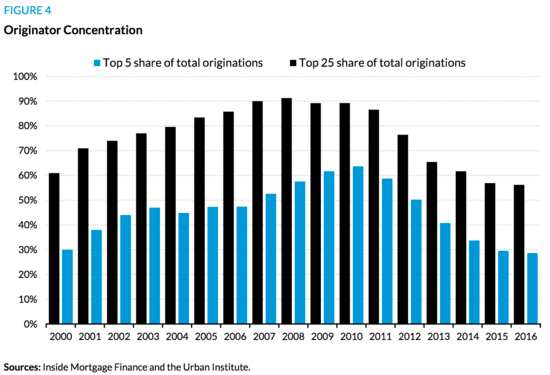 Because fewer loans will be made in a high-rate environment, banks and lenders will need to “right-size” their staff to ensure they remain profitable.

We’ve seen this happen already with the loss mitigation departments at banks as foreclosures and short sales become a thing of the past.

Along with that will come mergers and perhaps a return to a more consolidated group of mega mortgage lenders.

However, we continue to see new entrants into the mortgage space, such as Redfin Mortgage and fintech companies like Better Mortgage. I don’t see them going anywhere, but there’s always the possibility of getting acquired.

If the old brick-and-mortar banks sense a threat, and/or the ability to innovate, perhaps they’ll just buy one of those startups.

Mortgage Prepayment Speeds Will Slow Down 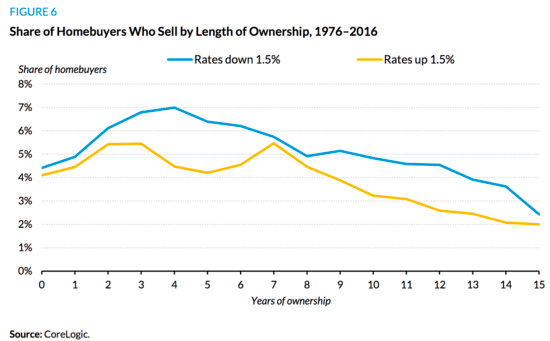 Related to the drop in mortgage volume will be a slowdown in mortgage prepayment speeds. That’s how long a mortgage is actually held before it’s paid off or refinanced.

As mortgage rates increase, prepayment speeds tend to slow because there are fewer people who stand to benefit from a rate and term refinance.

And if rates are higher, existing homeowners will have less motivation to move out, knowing it’s more expensive. They’ll also want to hold onto their more prized low rate if it’s much lower than the going rate of the future.

CoreLogic found that when interest rates were 1.5% lower than at the point of origination, a quarter of homeowners sold within five years.

A lower rate is a good opportunity to unload your old home and get a new one with even better financing terms.

Here’s one that continues to confuse folks. If mortgage rates rise, home prices will probably increase too. This seems to counter common sense, but it’s not as simple as it looks.

The easiest way to explain this phenomenon is that a growing economy leads to inflation, which leads to higher interest rates.

But because things are going well, we can also expect higher home prices thanks to rising wages and improved consumer confidence.

That good economy means a larger pool of buyers can spend more money on homes, which despite some decreased affordability rate-wise can propel prices higher.

Banks and lenders may also be willing to loosen underwriting guidelines to facilitate more aggressive financing, which can also give home prices a bump. 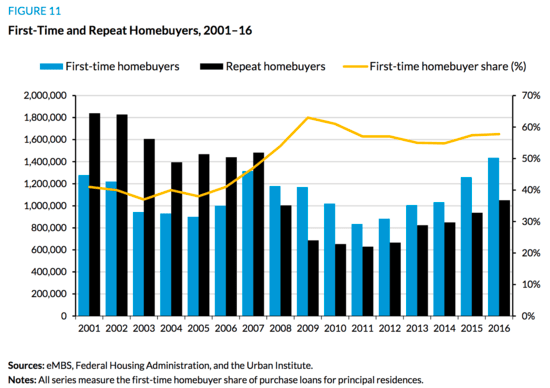 Some say those low mortgage rates are a blessing and a curse. Sure, they make homeownership cheap, but they also make it really hard to leave your current digs.

As rates rise, the repeat buyer share is expected to fall thanks to the “lock-in effect.” That’s the staying in place to keep your low rate dilemma.

Compounding this issue is the fact that many existing homeowners haven’t built much home equity over the past decade. In fact, some remain underwater despite the massive price gains seen in recent years.

Without a sizable amount of equity, it’s pretty difficult to move out and up, especially if rates are also higher.

Fortunately, there’s a solution to some of the problems discussed above. And it comes in one neat little package called a second mortgage.

For those who don’t want to lose their precious low-rate first mortgage, they can tap into their equity using a second mortgage like a HELOC.

And for those struggling with affordability due to both higher home prices and higher rates, they can extend financing and buy more house via a second lien.

Heck, maybe we’ll see the popular 80/20 loan return, allowing new buyers to get a home with nothing down. We’re not far off now, with 97% LTV lending available nationwide.

In the meantime, enjoy the low rates and don’t let them pass you by…