This Week in Mortgage Deduction Land

Well, it has been about a week since I shared my opinion on the much-disputed mortgage interest deduction.

Since then, plenty of folks have weighed in on the subject, so I thought I’d cover a handful of them in one convenient post.

First up is the United Technologies/National Journal Congressional Connection Poll, released today, which found that 41% of respondents think the MID should be reduced for ALL taxpayers.

Another poll, the Christian Science Monitor/TIPP survey, asked readers if they were to eliminate one popular tax deduction, which would it be.

Very few seemed interested in messing with the deduction for employer-sponsored health insurance (14%) or the retirement savings deduction (8%).

Looking back at a poll from October released by the National Low Income Housing Coalition, many favor (56%) a tax credit instead of the current deduction.

The hypothetical credit would replace the MID and provide the same percentage benefit, regardless of how much a household brings in.

At the same time, 63% said they supported capping the maximum mortgage amount at $500,000 for which one could get a deduction.

The idea here is to make the MID more beneficial for low- and middle-income earners, as opposed to being top heavy, as it currently exists. 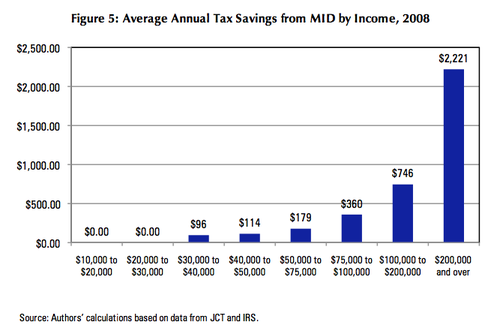 As you can see from this colorful graph furnished by the Reason Foundation, the richest homeowners in the nation benefit much, much more than those who make very little.

Of course, they pay more in taxes, so one could argue that it is somewhat relative, but that’s an argument for another day.

There’s also the “geographic inequality” of the MID, as mentioned by Emily Badger over at The Atlantic.

She cites an older study from researchers at Pennsylvania’s Wharton School, who found that the MID is enjoyed mostly in wealthy metros such as Los Angeles, New York, Boston, and San Francisco.

Again, this is due to home prices being much higher in those areas, so those paying that much more in mortgage interest benefit more via the deduction.

Then are the homebuilders, who are decidedly for keeping the MID intact.

Jerry Howard, head of the National Association of Home Builders, told The Hill that toying with the MID was “a ludicrous concept.”

He added that it’s the “last thing Congress should be considering” when working to stabilize the economy, and that it should be “taken off the table.”

However, yesterday Toll Brothers CEO Doug Yearley told Fox News that a “modest tweak to the MID” would be “okay.”

It’s unclear what he means by “modest,” but it’s certainly a breakthrough for a homebuilder to even concede that much.

Yearley also stressed that it would be “unfortunate if they did it now,” seeing that we’re in the early stages of a housing recovery, and touching anything now could lead to unintended consequences.

He also added that he didn’t’ think the MID would ever be entirely eliminated.

Finally, the LA Times has some interesting “letters” from readers regarding their opinion of the MID.

One longtime homeowner and Realtor argued for a $50,000 annual interest cap, meaning any interest paid over $50,000 wouldn’t be deductible.

And another homeowner seemed to feel conscience-stricken for getting the “unfair subsidy” that benefits homeowners and hangs renters out to dry, suggesting a “10-year phase out period” of the mortgage interest deduction.

So as you can see, opinions differ based on individual circumstances and priorities, and even those who benefit from the MID are willing to give it up.

previousFHA Gets Grilled for Just About Everything They Do
nextBofA Boss: Not Everyone Should Own a Home