A recent economic letter written by researchers at the Federal Reserve Bank of San Francisco paints a bleak picture for the future of the housing market.

It also puts into question all this “real” recovery talk of late.

Despite all the good news about fewer foreclosures and higher home prices, those who do default on their mortgages tend to stay out of the game for a long period afterwards.

Yes, even though you may have read heartwarming news stories about previously foreclosed homeowners making triumphant comebacks, most don’t.

10% Return Within a Decade

The researchers, William Hedberg and John Krainer, noted that only about 10% of homeowners with a prior serious mortgage delinquency (120 days past due or worse) returned to the mortgage market within a decade.

Why is this bad? Well, the historic default rate for mortgages has varied from 0-2%, but the most recent crisis has seen an aggregate default rate as high as 10%.

And in some especially hard-hit markets where subprime mortgages were prevalent, the default rate exceeded 25%.

It is also estimated that about four million foreclosures have taken place since 2007, with plenty more slated for the immediate future.

So if only a fraction of these previous homeowners actually return to the market, there will surely be demand issues, despite any short-term artificial supply constraints.

As you can see from the graph below, those with prior mortgages in good standing took out new mortgages in the future at a pretty steady clip. 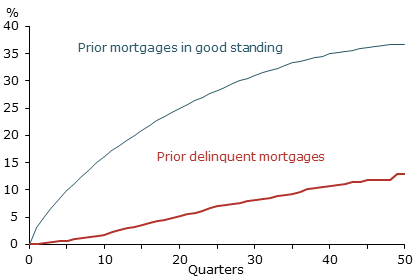 We’re talking more than 35% of borrowers, 12 years after termination of the prior mortgage.

Conversely, those who defaulted returned at a much slower rate, two-and-a-half times slower in fact.

Again, despite what the media has been saying about jilted homeowners making a return to the mortgage market, most aren’t.

And who can blame them? Most didn’t make out too well, so why would they be willing to dive right back in, especially with the economy still in a precarious position.

As you can see from the second graph, the return to the mortgage market for previous defaulters has been even slower after this most recent crisis, compared to prior downturns. 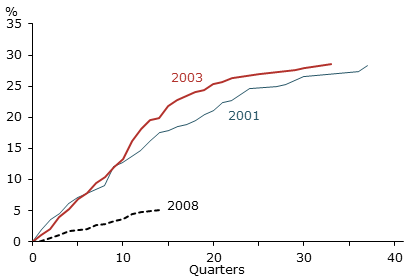 The researchers pointed to tight credit (lending) conditions and increased job uncertainty (unemployment), which have made it more difficult to obtain a mortgage.

During prior downturns, credit availability was much higher, and even subprime loans and low down payment options were widely available.

So again, many of these recent subprime borrowers are unlikely to return to the housing market anytime soon.

But those who do return tend to experience 100+ point improvements in their credit scores before they do, as most wind up with sub-600 credit scores post-foreclosure.

Long story short, though some foreclosed homeowners are making their way back to homeownership, most will probably rent for a long time.

The hope is that investors and those not burned by the recent crisis will fill in the blanks and keep home prices steady until then.

The analysis relied on consumer loan data from credit bureau Equifax, from the first quarter of 1999 until the fourth quarter of 2011.

Read more: How long do you have to wait after foreclosure to purchase a home?