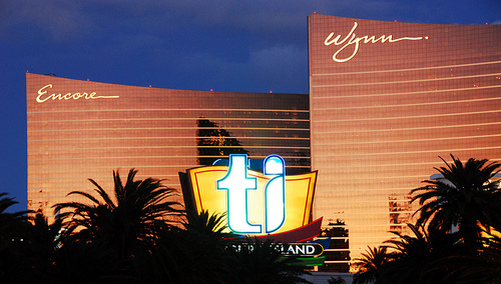 What happens in Vegas, stays in Vegas; that is, unless the world thinks you’re misusing the $25 billion in government aid you received just months earlier.

Such was the case with mortgage lender Wells Fargo, which had planned a lavish trip to Las Vegas for its top loan officers at some of the most expensive hotels on the strip, namely the Wynn and sister hotel Encore.

After originally defending the junket, the San Francisco-based bank scrapped the outing amid public outcry and criticism from Capitol Hill, according to a AP report

“Through all economic cycles, our recognition events have been an important part of our company’s culture,” Wells Fargo said in a special news release.  “Late last year, we cancelled recognition events for 2009 except those where the financial commitment was so great that no meaningful savings would occur by canceling these events.”

“We had scaled back the mortgage event, but in light of the current environment, we have now decided to cancel this event as well. We do not plan to have any other recognition events this year.”

Additionally, Wells argued that the government funds have been used to boost lending, as evidenced by its $50 billion in fourth quarter loan originations.

The conference is apparently a Wells Fargo tradition; previous destinations include a horseback riding trip in Puerto Rico and a private Jimmy Buffett concert in the Bahamas.

Morgan Stanley, which had planned a similar trip to Monte Carlo in April, said the event is now off.

Bank of America, which acquired both Countrywide and Merrill Lynch, has cancelled all “employee incentive trips” indefinitely.