What Will Happen to Your Mortgage When the LIBOR Goes Away? Hello SOFR!

If you have an adjustable-rate mortgage, I’ve got some important news for you.

The London Interbank Offered Rate, or LIBOR as it’s known to most, is going to be phased out over the next five years.

After 2021, it won’t exist because banks no longer want to take a role in setting it.

If you recall, the LIBOR was at the center of a scandal back in 2012 after it was discovered that bankers were manipulating the price for decades.

Unfortunately, this meant innocent consumers, including many homeowners with adjustable-rate mortgages, were receiving inaccurate (perhaps higher) pricing once their loans became adjustable. 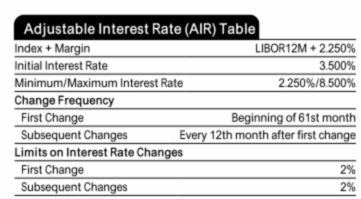 If you have an ARM, go ahead and check to see what index it’s tied to. Pull out your Closing Disclosure (CD) and look for the Adjustable Interest Rate (AIR) Table.

As you can see, it will detail the initial interest rate on your loan, along with the index and margin in question. You may something like the image above, which stands for 12-Month LIBOR, or 1-year LIBOR.

Many ARMs are attached to LIBOR, meaning once they become adjustable after the first three, five, or seven years, the rate will be determined by the margin plus the associated LIBOR index.

But what happens if there is no longer a LIBOR to peg your mortgage rate to? What happens then?

Does the index go to zero, allowing you to enjoy the floor rate (generally the starting rate) for the remaining term on your mortgage?

Apparently, banks have already figured this out and prepared for the worst. And by worst, I mean covering themselves in the event the index needs to be changed for whatever reason.

You’ll Probably Get a Similar Index Instead

When the LIBOR disappears after the year 2021, your former LIBOR-based ARM will be attached to a new, like index.

Which index will that be? It’s unclear, but it probably won’t be the MTA, CMT, or the COFI. Why?

Mortgage lenders aren’t going to give you a lower-priced index out of the kindness of their heart, especially if investors own the underlying loans and expect a certain return.

The LIBOR seems to be significantly higher than most other indices out there at the moment, so finding an existing replacement might prove difficult.

Instead, a group called the Alternative Reference Rates Committee (which convened after the LIBOR scandal) may come up with a new benchmark rate based on repo trades backed by Treasury securities.

What that means in plain English is that your ARM will have a new index that you’ll need to worry about, assuming you keep the loan past its first adjustment date.

Will the New Index Be Better or Worse?

This is the million-dollar question. If I had to guess, I’d assume consumers would get the short end of the stick, as per usual.

But this could also prove to be a very controversial issue if it’s determined that consumers are paying more for their mortgages as a result of this change, even if it’s marginal.

A small increase applied to all ARM-holders could amount to big bucks for lenders and investors, which could be seen as a big no-no, even if it only costs a given individual a few bucks extra.

California Rep. Brad Sherman, who got involved after the LIBOR debacle, told the WSJ “he would be watching to see how consumers are affected,” while a Freddie Mac spokeswoman said it would try “to minimize the impact on consumers.”

Meanwhile, a Fannie Mae spokeswoman merely said it was “monitoring” the situation. There’s a good chance mortgage lenders and investors will look to Fannie and/or Freddie, so they better figure it out soon.

This is especially concerning because lenders continue to originate LIBOR-backed ARMs, which is kind of problematic seeing that the LIBOR won’t exist when the loans become fully-indexed.

LIBOR Being Replaced by SOFR

The LIBOR is reportedly being replaced by the Secured Overnight Financing Rate (SOFR), which is priced lower than LIBOR, but may narrow over time.

Some early research by the Urban Institute reveals that SOFR will be priced between 25 to 50 basis points lower than the 1-year LIBOR.

In other words, those with LIBOR-based ARMs could see interest rates fall by .25% to .50% once they adjust, relative to what they would have been, saving them a collective $2.5 to $5 billion a year.

Fannie Mae and Freddie Mac have both announced that they will no longer acquire ARMs indexed to LIBOR by the end of 2020.

Per Fannie, the final application date of loans tied to LIBOR must be on or before September 30th, 2020.

The company expects to begin accepting SOFR ARMs in the second half of 2020.

2 thoughts on “What Will Happen to Your Mortgage When the LIBOR Goes Away? Hello SOFR!”