Which Mortgage Should I Pay Off First? 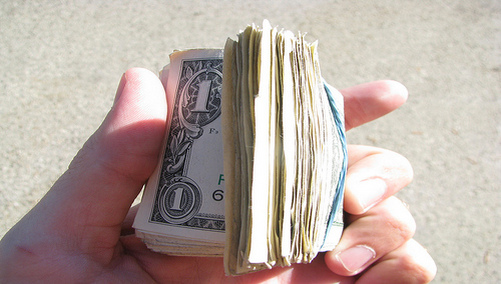 Mortgage Q&A : “Which mortgage should I pay off first?”

Today we’re going to talk about strategy if you hold multiple mortgages and want to reduce your total interest expense.

It’s not uncommon to have multiple mortgages, such as a first and second mortgage tied to the same property.

Or perhaps a couple mortgages on separate properties, such as one on a primary home and another on a second home (or investment property).

Before we dig into the details, paying down the loan with the higher interest rate is generally advised. 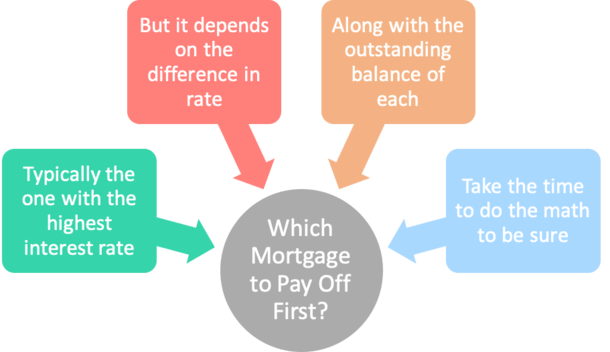 Let’s consider an example. If you’ve got a first mortgage at a rate of 6%, and a second mortgage set at 12%, it’d probably be in your best interest to knock out that second mortgage sooner rather than later.

That means making extra mortgage payments on the second mortgage if you’ve got the money handy (assuming you actually wish to pay down your mortgage ahead of time).

These days you have to question whether borrowers actually want to pay off their mortgages early, as many are locked in at record low rates that are quite favorable to hold onto.

Anyway, let’s look at an example to illustrate the savings:


Let’s assume you’ve got a first mortgage with an interest rate of 4%, and a second loan set at a rate of 8%.

If you were to pay an additional $100 a month on your first mortgage, you’d save $26,855.30 in mortgage interest over the full duration of the loan, and shave 4 years and 11 months off the loan term.

So clearly the move here would to be pay off that second mortgage first, seeing that it has a mortgage interest rate double that of the first mortgage.

It Can Depend on Loan Size

Of course, there are instances when the opposite could be true. Let’s look at another example:

As a result, it would actually be in your best interest (no pun intended) to make the extra $100 payment on the larger first mortgage, even though the interest rate is lower than that of the second.

You would save $34,085.83 in interest over the life of the loan, and shave about three and a half years off your loan.

If you chose to make the extra $100 payment on the second mortgage each month, you’d only save $29,223.42 in interest, though you would shave 13 years and 7 months off the term.

Simply put, you really need to do the math (using an early payoff calculator) to determine which home loan to pay down first. It’s not always as simple as picking whichever interest rate is higher.

Consider All the Details

Additionally, many second mortgages may be ARMs, such as HELOCs, so there’s the risk the rate could rise over time.

This would give you more incentive to pay it off, to avoid any payment shock or increased interest expense.

[How to pay off the mortgage early.]

Of course, it may not always be wise to make larger payments than necessary on your mortgage(s).

If you’ve got credit card debt at 18% APR, you’ll probably want to pay that off before making extra payments on your mortgage(s), which carries a relatively low interest rate.

Some homeowners seem to want to pay down the mortgage as quickly as possible while racking up thousands in finance charges on their credit cards, despite the fact that mortgage interest is tax deductible and credit card interest is not.

Speaking of, you could consider which loans are tax deductible and which are not, and add that to the overall decision as well.

Read more: Pay off the mortgage or invest?

2 thoughts on “Which Mortgage Should I Pay Off First?”

previous1,000 Bank Failures Expected
nextWhat Do Loan Processors Do? In Short, Everything to Close Your Loan!