Why Is the Housing Market Cooling? And Should We Worry About a Bubble Bursting?

The housing market is cooling. There’s really no debate. Things are slowing down. You can mostly thank a doubling in mortgage rates and high home prices for that.

However, talks of a more severe housing bubble might be overstated.

After all, home prices are lofty, the stock market is shaky, and the economy is looking as uncertain as ever.

But let’s talk about why things aren’t the same as they were 15 years ago.

Yes, Home Prices Are Too High

First things first, home prices are too high. Similar to pretty much every other asset, whether it’s a tech stock or bitcoin, home prices overshot the mark.

This was arguably driven by the easy money days of the past decade, exacerbated by a pandemic and a frenzy to own real estate, especially in the suburbs and exurbs.

For example, everyone wanted lots of space all of a sudden, far from urban centers.

This ran counter to the trend of moving into cities and ditching cars for pedestrian-friendly, urban hubs.

The reason was COVID-19, which has now mostly abated, making those who purchased in far out places question the decision.

We’ve also had a massive supply/demand imbalance, with far too few homes available to satisfy the appetite of prospective home buyers.

Together, this led to record home price appreciation, with property values rising 125 straight months on a year-over-year basis.

In fact, home prices were up 18.3% in June 2022 from a year earlier, per CoreLogic. However, home price gains slowed from the prior month for the second consecutive month. 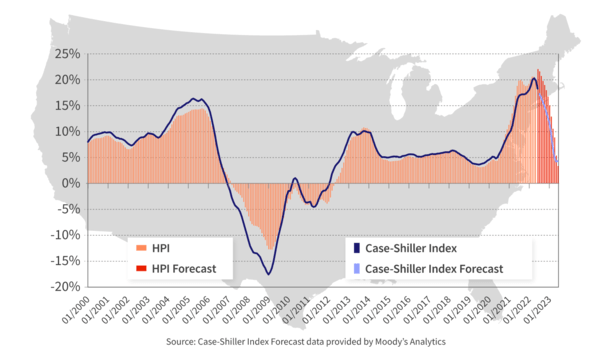 There’s been a lot of confusion regarding home prices lately. Some folks seem to be jumbling slowing appreciation with falling prices, as if they’re the same thing.

But as noted, home price GAINS are dropping. In other words, if your home was appreciating 10% year-over-year, it might only rise 5% next year.

The takeaway is that it’s still rising in price, which might be the best way to look at today’s housing market.

This differs from the stock market, which has actually fallen quite a bit to the point of being in a bear market.

Because we experienced the worst housing crisis in our lifetimes just over a decade ago, it’s natural to start having those same concerns.

There are probably also sharks waiting and hoping for home prices to plummet so they can scoop up homes on the cheap.

But as of now, it doesn’t appear that an outright housing bubble is in the cards, as expensive as real estate is these days.

A Housing Bubble Should Burst, Right?

The term “housing bubble” is a somewhat loose phrase that may be defined in numerous different ways.

But the general thinking is that a bubble should pop if it’s a truly a bubble.

That means it’s unsustainable, and a soft landing isn’t possible. The air isn’t slowly let out of the balloon. It pops, violently.

With regard to a housing market bubble, this would mean plummeting home prices and a deluge of distressed inventory, including short sales and foreclosures.

I think if you asked the average American if they foresaw a housing market like that, they’d probably say no.

Instead, they might say “home prices are too high, they need to come down.” They might also express that it’s a bad time to buy a home.

Does that equate to a “pop,” or is it more of a fizzle?

Economist Mark Zandi already called a housing market correction back in June, but merely referred to it as the end of the housing boom.

The end of a boom isn’t synonymous with a bubble burst. It might simply mean that the housing market has peaked and is now expected to cool.

Why No Housing Bubble Burst This Time Around?

A housing market bubble is typically accompanied by rampant speculation, a huge run up in prices, and lots of questionable home loan financing.

It’s generally also driven by a supply glut, that is, too many homes for sale and not enough demand.

If you consider all of the above, the only thing that seems to stand out is a “huge run up in prices.”

There hasn’t been crazy speculation, there isn’t shoddy financing, and there certainly hasn’t been an oversupply of homes.

On the contrary, there’s been too few homes for sale and a mortgage market dominated by 30-year fixed mortgages priced at all-time lows.

To that end, how many existing homeowners with 2-3% 30-year fixed mortgages and tons of home equity are going to lose their homes if the housing market cools?

In 2007/2008, the typical homeowner had no equity, an option ARM for a mortgage, and wasn’t qualified to be in the property to begin with.

There was also a huge oversupply of homes on the market and more actively being built, which led to the worst housing bubble burst in recent memory.

This doesn’t mean home builders today won’t have to lower prices, or that prospective buyers will walk away from purchases.

That likely will happen as home price appreciation comes to a halt. And you’ll see all the negative headlines regarding the housing market along the way.

But unless something significant takes place, a housing bubble burst doesn’t appear likely at this juncture.