Below is an extensive and exhaustive (and silly but somewhat serious) list of places where it might not make the best sense to buy a house, assuming you want to realize healthy home price appreciation and enjoy a high quality of life.

Obviously there are exceptions to the rule, and it’s not always easy to find that perfect home. In fact, these days it’s very difficult to find anything at all.

In any case, this is just a general list I rattled off the top of my head. Feel free to chime in if you disagree. Or add one if you feel I’ve missed a spot…keep in mind that unique properties can also be more difficult to appraise and obtain financing on. 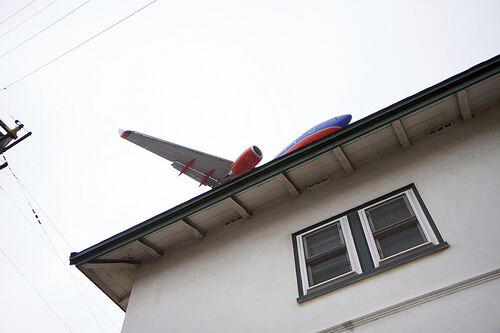 (photo: Marcin Wichary)
1. Next to a major street – noisy, busy, unsafe for your children and your pets.
2. Next to train tracks or a train station – including trendy light rail.
3. Next to a freeway – loud, unsightly, unhealthy, and unrelenting.
4. Next to an airport – you thought the freeway was loud…
5. Next to a busway – buses are annoying too.
6. Next to an alley – nothing good ever happens in an alley.
7. Next to an apartment complex – do you really want hundreds of eyes staring at you, every single day?
8. Next to a commercial building – noise, workers, trash, eyesore, you name it.
9. Next to an ugly house – there’s a good chance it’ll remain ugly.
10. Next to many other homes for sale – something ain’t right in the neighborhood.
11. Next to a mansion – if someone aggressively overbuilt for their area, you don’t want to be their neighbor.
12. Next to an empty lot – surprises aren’t always good.
13. Next to an abandoned building – nothing good happens in abandoned buildings either.
14. Next to power lines – power is good, seeing where it comes from on a daily basis isn’t.
15. Next to a power grid – now multiply that by a thousand.
16. Next to a body shop – you know that one noise when a tire is being removed with a high-pressure nozzle.
17. Next to a traffic signal – if you can see the red, green, and yellow lights, you’ve got a major problem.
18. Next to a factory – the toxins emanating from the smokestack are both a health and visual hazard.
19. Next to a gate – think the edge or entrance of an exclusive gated community you’re not a part of.
20. Next to a large tree – big tree = big roots = big problem. 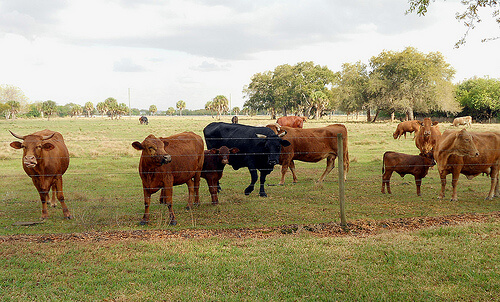 (photo: Roger W)
21. Next to a farm – cows and other vegetation smell really bad. And roosters don’t just cook-a-doodle-doo once a day.
22. Next to a sewage plant – they smell even worse.
23. Next to a landfill – see #22.
24. Next to a nuclear power plant – one word: meltdown.
25. Next to a military base – explosions may happen, just not in the home price department.
26. Next to a jail – inmates have been known to escape regularly.
27. Next to a marina – seals are loud, as are boats and foul-mouth sailors.
28. Next to a strip club – it’s not just dancing.
29. Next to a casino – gambling brings with it drama.
30. Next to a bar – they’re open late, and they’re loud. And their patrons may urinate on your lawn.
31. Next to a nightclub – unless you really, really like techno.
32. Next to a liquor store – they tend to be in not-so-great areas.
33. Next to a pot shop – the next big thing in legalized drugs probably isn’t good for property values.
34. Next to a gas station – you’ve read the warning labels on the pumps right?
35. Next to a parking lot – unsightly to both you and your future buyer.
36. Next to a high school – hello graffiti, keyed cars, and other nonsense.
37. Next to any school – school traffic five days a week, neurotic parents, annoying bells, early morning band practice.
38. Next to a stadium – parking, traffic, drinking, yelling, screaming, losing.
39. Next to a daycare – you know, the weird brightly painted homes that host low-cost daycare centers.
40. Next to a dog breeder – smell, smell, bark, bark.
41. Next to a cat breeder – it gets worse.
42. Next to a fortuneteller – yes, there seem to be a lot of these, and your future home price may suffer. 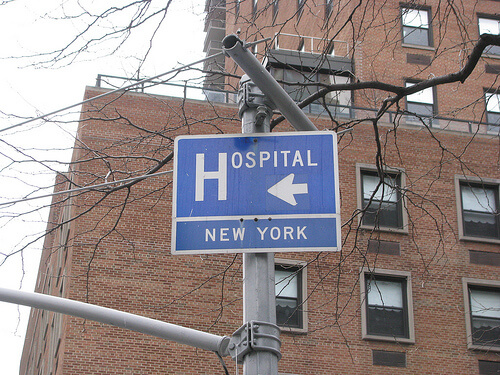 (photo: me)
43. Next to a hospital – unless you like the sound of sirens.
44. Next to a fire station – see #43.
45. Next to a police station – see #44.
46. Next to the home sales office – the builder shouldn’t be your neighbor, even temporarily.
47. Next to a graveyard – does this really need to be explained?
48. Next to a volcano – they tend to erupt ash and spew molten lava.
49. Next to a dam – if that thing breaks…
50. Next to a sex offender – check the scary map before you buy.
51. Next to the zoo – animals wriggle free and all hell breaks loose.
52. Next to a sinkhole – this one’s a toughie, because you won’t know until your house is swallowed whole.
53. Next to a river – we’re talking a trash-filled dumpy one that leads to the ocean, not the pretty variety.
54. Next to a mine – something about it just doesn’t sit well with me.
55. Next to an oil or gas well – no, you’re not going to strike it rich. 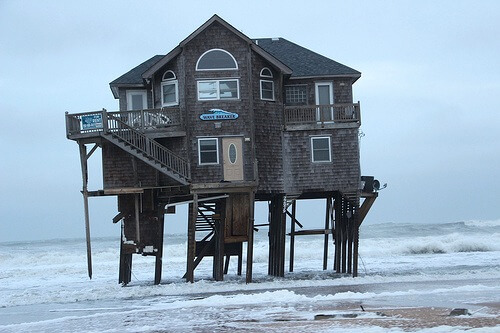 (photo: Don McCullough)
56. On the beach – the sea level is rising every day…
57. On a dead-end street – lovers’ lane aka not the “cul-de-sac” your real estate agent claimed it was.
58. On a through street – you know the one, the shortcut everyone takes on their daily commute.
59. On a major street – loud, unsightly, no privacy, speeding cars, etc.
60. On a street with speed bumps – or even humps!
61. On a small lot – if your lot is small, there’s not much room for more.
62. On a corner lot – traffic, headlights, small backyard, exposed.
63. On a weird lot – if your house is facing the opposite way of all the other houses on the street, or on a long driveway that winds up behind another house, it’s weird.
64. On a bad foundation – make sure the stuff below your house will stay put for a long time.
65. On a golf course – FORE!
66. On a swamp – sinking is never good, is it?
67. On the edge of a cliff – do you like to lead a stress-free life?
68. Below a cliff – mudslides can do wonders to muddy up a beautiful home.
69. On the top of a mountain – the view’s great, but the commute to civilization is always long and windy.
70. On the edge of town – just because they say your town is expanding doesn’t mean this century.
71. On a fault line – earthquakes are scary enough when you’re 100 miles away. 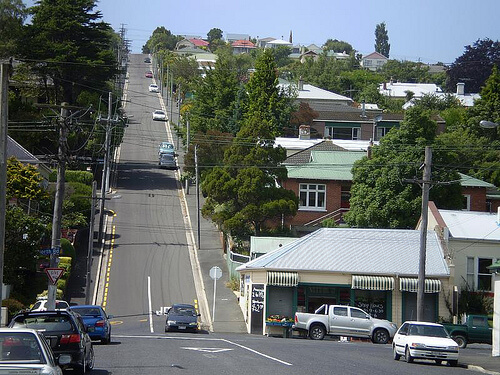 (photo: Tony Bowden)
72. On a steep road – we’re talking really steep.
73. On a narrow road – yes, some roads are absurdly narrow.
74. On a street with no driveways – driveways are good, trust me.
75. On a street with parking issues – street sweeping and permits make parking a bear, not to mention expensive.
76. On a blind curve – you’ll need to install one of those mirrors on your driveway…
77. On a weird road – yes, some roads are weird for one reason or another.
78. On the United States border – it’s best to be well within the confines of the US of A.
79. In a fire hazard zone – a burnt down house isn’t fun.
80. In a flood zone – nor is a waterlogged home.
81. In a hurricane zone – these are pretty much a matter of when, not if.
82. In a tornado zone – your odds are better, but it’s still a crapshoot. 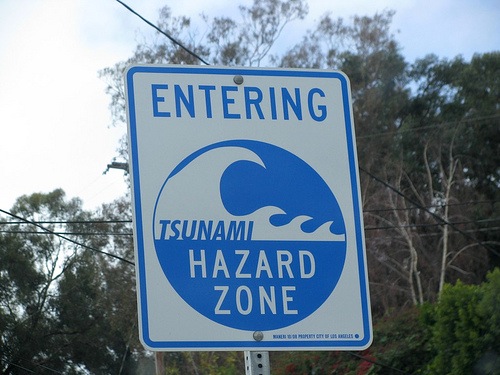 (photo: me)
83. In a tsunami zone – yes, it’s possible. There are even evacuation signs to tip you off.
84. In a liquefaction zone – intense shaking and foundation damage during an earthquake isn’t pleasant.
85. In a crime-ridden area – do your research before you buy. Bars on the windows is your first hint.
86. In a new housing tract – you won’t want to be the only one who bought in your half-vacant neighborhood.
87. In an overdeveloped area – supply and demand ladies and gentlemen.
88. In a foreclosure-ridden neighborhood – house values will be under serious pressure.
89. In a construction zone – loud, debris, orange helmets, the sweet smell of hot tar.
90. In a bad school district – unless you like paying for private elementary school.
91. In the middle of nowhere – demand usually isn’t so high, nor is there much fun to be had.
92. In a smelly neighborhood – some neighborhoods just smell like sh*t.
93. By a lake – feathers, nests, quacks…
94. At the end of a very long road – unless you have an Amazon Prime account.
95. Next to a fast food restaurant – you know that smell.
96. Next to a pet hotel – great for dogs, bad for your sanity.
97. By an intersection – car crashes, lights, pedestrians
98. At the base of a T-junction – headlights!
99. Close to a wind turbine – it can get gusty.
100. In a mixed-use development – what exactly is going on down there?
101. Next to a hoarder – it tends to spill over and out.
102. In a town everyone is leaving – it’s way better the other way around.
103. Where it’s much cheaper to rent.