Goodbye Refi: Only 55% of Mortgages Have Above-Market Interest Rates

The last couple of months have been rough, real rough, assuming you work in the mortgage industry.

Sure, things aren’t terrible, but I’ll assume most participants would prefer to be living in May 2013, as opposed to August 2013.

After all, mortgage rates have surged, rising from around 3.375% in early May to closer to 4.5% today.

So it’s not just industry folk who are hurting, but also homeowners across the country (and prospective buyers) that can afford less house and save fewer dollars via a refinance.

Still, those purchasing homes today should be fairly happy to snag mortgages with rates at current levels, seeing that they’re quite attractive historically.

Whether the asking price is right is another question, but I digress. 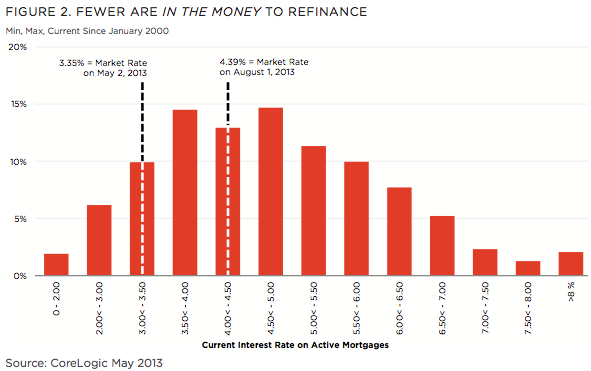 To put in perspective just how massive the recent interest rate spike has been, consider the fact that 80% of mortgages had above-market rates prior to the run-up, according to the August MarketPulse report from CoreLogic.

In other words, the recent rise in rates slashed the share of outstanding mortgages with above-market rates by 25 percentage points.

Of course, this isn’t to say that all of those borrowers could have benefited from a refinance before rates jumped.

In fact, a much smaller share is actually “in the money,” per CoreLogic, which assumes average closing costs of $3,000 and minimum monthly payment savings of $200.

They don’t go by interest rate reduction alone because smaller loans won’t realize comparable payment savings, even though the closing costs could be similar to that of a larger loan.

[The Refinance Rule of Thumb]

Anyway, using that calculation, CoreLogic said only 29% of borrowers remain “in the money” now that mortgage rates are much higher.

Long story short, it doesn’t make sense to refinance for the vast majority of borrowers out there, whether they believe it or not (or are told otherwise).

This is particularly startling considering how low mortgage rates continue to be historically.

In effect, it means the refinance market could get really ugly in the future if mortgage rates return to more modest levels around 6% or higher. At that point, very few would benefit from a refinance.

This could hurt the cash out market as well, with fewer borrowers willing to tap equity if it means giving up their ultra-low mortgage rate.

Perhaps an alternative will be an uptick in home equity line lending, thus keeping the first mortgage intact.

While it might suck to be a loan originator in the not-too-distant future, assuming purchase activity doesn’t pick up most of the slack, it could bode well for housing in general.

If we get to a point where most mortgages have interest rates that are below market rates, it could lead to lower default levels, foreclosures, and the like.

After all, if everyone has a nice, low fixed rate mortgage, a new crisis should be years away.

previousWho Needs a Mortgage? More than Half of Homes Paid for with Cash Last Year
nextThe FHA Is Now Offering Mortgages to Borrowers Just One Year After Foreclosure, Short Sale, or Bankruptcy