Resetting the Clock When Refinancing Your Mortgage

With mortgage rates trickling back toward record lows again, thanks to our lackluster economy and the Fed’s pledge to continue buying mortgage-backed securities, refinance applications are on the rise.

The Mortgage Bankers Association noted this morning that refi apps were up nine percent week over week, and are now at levels not seen since June. Hooray!

While the rally might be short-lived, it could renew interest for some that were on the fence about refinancing, especially if their current rate isn’t all that high compared to current market rates.

When you refinance your mortgage, there are plenty of implications. It’s not just about a lower monthly payment, despite that being shoved down your throat.

There’s also the cost and time involved, the product you choose, and so on. Oh, and the status of your current mortgage, along with what you plan to do post-refinance.

What Does It Mean to Reset the Mortgage Clock? 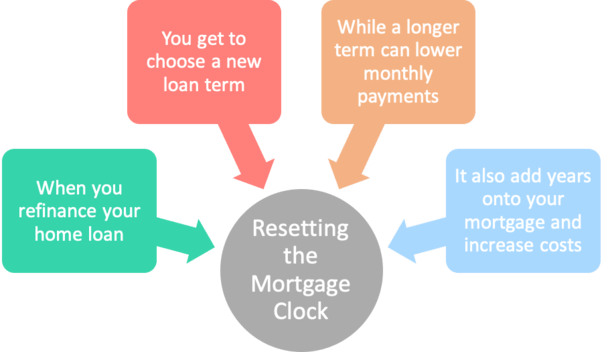 One thing some homeowners might overlook when refinancing is their mortgage term, seeing that most individuals tend to focus on monthly payments above all else.

But when you refinance, you wind up with a new term and amortization schedule.

So if you previously had a 30-year mortgage that was five years old, and refinanced into another 30-year mortgage, your term would increase from 25 years back to 30 years.

This matters. It matters because the longer you take to pay off a loan, the more it will cost you in the way of interest. This is one reason why 40-year loans aren’t very popular and all but extinct nowadays.

Sure, your monthly payment will be lower on a longer-term mortgage, but you’ll pay a lot more interest and build home equity much more slowly.

So for those that refinance into a mortgage with the same term as the original mortgage, the clock is effectively reset. You’re back at square one, at least in terms of when your mortgage will be paid off.

Even if your payments are lower, you’ll still have to make another 360 payments (in the case of a 30-year loan) before you own your home free and clear, assuming you don’t pay it off early or refinance again.

Now the mortgage term isn’t the be-all and end-all because homeowners refinance for plenty of different reasons, but it is something you need to strongly consider.

Let’s do some math to illustrate this clock resetting business:

Keep in mind that during the first five years on the original loan they paid about $58,000 in interest. That needs to be factored into the total equation as well.

[Why are mortgage payments mostly interest?]

In reality, the borrower will pay about $200,000 in interest when you consider the full 35 years of monthly payments.

Had the borrower not refinanced and paid off the original loan, they would have paid about $232,000 in interest. So there are still decent savings to be had, even when restarting the clock.

However, that was a near 2% drop in rate. What if it’s a lot slimmer than that?

If our hypothetical borrower had an original interest rate of 5.25% instead of 6%, total interest paid over 30 years would be roughly $198,000.

Factor in refinance costs, assuming it’s not a no cost refinance, and the savings could be negligible.

You Can Reset the Mortgage and Still Win

The obvious answer to this “problem” is to refinance into a shorter-term mortgage, such as a 15-year fixed mortgage.

That way your effective mortgage term is actually 20 years, five from the original mortgage plus 15 more via the refinance.

Throw in a lower rate (15-year fixed mortgages are cheaper) and the savings will be substantial. We’re talking close to $100,000 less in interest paid. Not to mention you own your home a lot quicker.

But that involves a higher monthly payment, something not all homeowners are particularly fond of.

After all, some borrowers just want to reduce monthly costs and put money elsewhere, such as in a retirement account or other investments that yield better returns.

There are also homeowners refinancing out of ARMs and into fixed mortgages, which resets the clock but puts the borrower into a loan they know will not adjust higher.

Additionally, look at moguls like Facebook founder Mark Zuckerberg, who keeps refinancing from ARM to ARM to save money. Sure, he can pay off his mortgage whenever he wants, but he’s still resetting the clock over and over again.

Tip: You can also refinance from a 30-year loan to another 30-year loan at a lower rate, but make your old monthly payment.

This could save you a good amount in interest and shed years off your mortgage, making the effective term of both loans less than 30 years.

Of course, you’ve got to be reasonable. If you’re well into paying off your mortgage, there’s less incentive to refinance and reset the clock, seeing that interest is front-loaded on mortgages.

But if it’s early days, you shouldn’t fret too much.

As always, do the math and be sure to factor in loan term when determining whether or not to refinance.