Home Prices vs. COVID-19: Will They Go Up or Down?

It’s time to take a look at how COVID-19 could impact home prices given the massive disruption to the local, state, national, and global economy.

On the one hand, inflation is expected due to all the government spending, which could lead to a price increase since real estate often acts as an inflation hedge.

Conversely, if tons of borrowers lose their homes due to unemployment, we could see properties flood the market. And when combined with fewer eligible buyers, it could lead to a supply glut.

Consider the Lack of Housing Supply and Mortgage Quality

First, let’s compare today’s housing market to the one in 2006. They really couldn’t be any different, both from an inventory standpoint and from a mortgage perspective.

Simply put, back then there were way too many homes being built, and not enough demand to meet that supply.

At the same time, banks and lenders were doling out home loans to anyone with a pulse, knowing they could quickly bundle the underlying mortgages and sell them to Wall Street shortly after origination.

Taken together, it was a recipe for disaster. Homeowners had massive mortgages they couldn’t truly afford that were often set to adjust higher just months after they took them out.

They also had no skin in the game, aka home equity, so there wasn’t much incentive to stick around and try in vain to keep a sinking ship afloat.

Today, Americans are sitting on the most home equity in history, and very little of it is being tapped thanks to tighter underwriting guidelines that have only become more restrictive since COVID-19 reared its ugly head.

Meanwhile, there’s an inventory shortage that has likely only worsened as fewer existing homeowners list their properties, and mortgage rates are at record lows.

In short, homeowners today have tons of equity and historically cheap mortgages, and home buyers have fewer properties to choose from and ridiculously low mortgage rates at their disposal.

The Great Unknown Ahead

Now it’s wonderful that today’s mortgages are mostly pristine, and that homeowners have tons of equity to serve as a cushion if forced to sell.

But we’re living in a very fluid and strange environment at the moment that could change in no time at all.

For example, one in five Americans have filed for unemployment since mid-March, and that’s likely only going to get worse.

So even if many of these homeowners had super affordable mortgages, a lack of income and the inability to tap their equity could put them at risk quickly.

To counter that we’ve got the mortgage forbearance offered via the CARES Act, which is great for struggling homeowners but only lasts for 12 months.

What happens after that? At best, if they simply have to resume making normal payments, there’s a decent chance not everyone will be re-employed and able to do so.

The world has changed and may not go back to “normal,” and thus not everyone will have the realistic ability to return to making monthly mortgage payments.

Even if they’re offered a loan modification to lower their payment, it still might not be enough if they can’t find work.

The same goes for investment properties such as those offered by Airbnb and other short-term vacation companies, or kiddie condos owned by parents in college towns, which might remain vacant.

That’s where these two very different housing markets could begin to intersect. The good news is we didn’t have a supply glut before COVID-19 came around.

Back in 2006, we had a massive oversupply that was further exacerbated by a financial bubble, so it was a one-two punch.

Additionally, one could argue that both homeowners and lenders were to blame for what happened back then.

Sure, lenders offered high-risk products, but borrowers happily pulled out billions in cash out along the way to spend on who knows what.

Today, you can’t really blame a homeowner who is unable to make their mortgage payment due to the coronavirus epidemic.

And it’d look really bad to foreclose on this type of homeowner, which could limit the damage and keep inventory tight.

But here’s the thing – no one can sit here today and say they know what’s going to happen with COVID-19. And data models can’t forecast properly in this environment.

So really anything right now is a guess.

What Are We Seeing So Far in the Housing Market? 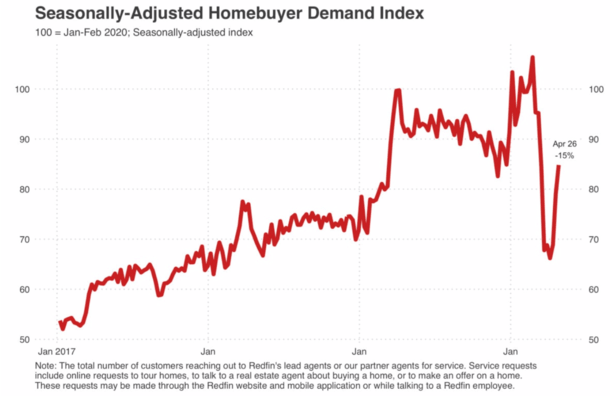 Everyone seems to want to call this event temporary – a moment in time that will magically fix itself once the economy opens up.

I don’t subscribe to that, as much as I wish it were true. You can’t simply erase what’s happened the past several months, nor what lies ahead in the aftermath.

Speaking of, are we even “after” yet, or is this still in the early innings. While that too can be debated all day long, again no one really knows.

But we can look at early impact to get some sort of a clue.

The MBA reported that seasonally adjusted home purchase applications increased 6% from a week earlier, with even bigger gains seen in California and New York.

The ever-cheerful National Association of Realtors reported that home sellers have not lowered their listing prices as a result of COVID-19.

In the latest week, 73% of Realtors said their clients did not reduce listing prices to attract home buyers.

That’s been pretty steady for the past few weeks since NAR began reporting on it.

Additionally, they said today that 77% of prospective sellers “are preparing to sell their homes following the end of stay-at-home orders.”

In other words, once this blows over it’s going to be real estate business as usual, sans discount!

Interestingly, buyer needs might have changed – they now want a big backyard to play in and grow their own food, along with a home office and possibly a home gym too.

The less is more thing may no longer be a hot trend, nor is urban living possibly as popular. The Burbs are back!

Over at Redfin, it’s also good news with nearly 53,000 homes hitting the market during the week ending April 24th, compared to just over 48,000 for the week ended April 13th.

Additionally, pending home sales have increased from less than 31,000 to more than 32,500 during those same periods.

Despite the rise in new listings, there were less than 700,000 homes for sale in Redfin markets nationwide, the lowest amount the real estate brokerage has seen during the past five years.

That might explain why the median listing price was $308,000 for the week ending April 24th, up 1% compared to the same period last year.

Home buyer demand has also begun to climb back after taking a hit in March, a sign potential buyers are unfazed and ready to move forward.

A Home Price Projection from Zillow

Now let’s take a look at a projection from Zillow, the creator of the Zestimate that should know a thing or two about home prices.

They have forecast a mere 2-3% drop in home prices through the end of 2020, which will be followed by a recovery in prices throughout 2021.

That means a small drop this year that is recovered next year could mean no material change for home prices due to COVID-19.

So they appear to be on the “this is temporary” wagon. Prior to the coronavirus outbreak, home prices were expected to rise 3.3% on average in 2020, and 2.7% in 2021, per the Zillow Home Price Expectations Survey, which includes a panel of more than 100 economists and experts.

But again, their “proprietary macroeconomic and housing data” might not be well-equipped to take into account a pandemic.

They have three different scenarios for home prices, including an optimistic, medium, and pessimistic outlook.

In all cases, home sales are expected to take a big hit of 50-60%, though when they recover varies.

That might hurt real estate agents and mortgage lenders if mortgage refinance volume begins to waver.

The good news, despite all the horrible news, is that homeowners are a lot better off today than they were in 2006, which means more of them should be able to get through this crisis without losing their home.

And that should bode well for home prices.