Is the Housing Market Finally Slowing Down? Not So Fast…

It’s a question a lot of prospective home buyers are asking right now. When will the housing market slow down? When will the bidding wars end and prices fall back to earth?

After an unprecedented year of home price gains, which somehow took place during a global pandemic, would-be buyers are looking for a reprieve.

But is it finally here, or is this just another seasonal fakeout?

It Has Been Very Much a Seller’s Market in 2021 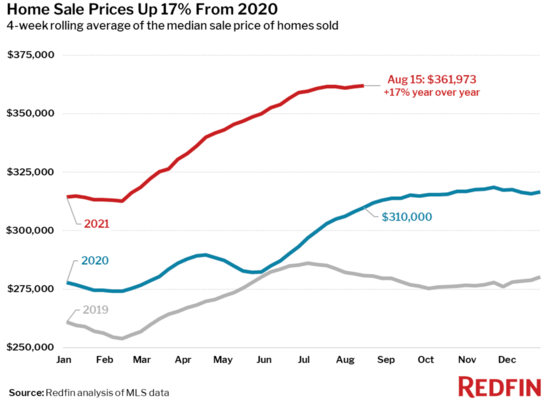 First, the bad news, assuming you don’t own yet. Home prices continue to be on a tear, with the median home-sale price rising 17% year-over-year for the week ending August 15th, per Redfin.

That pushed home prices up to an all-time high of $361,973, and was a much more pronounced climb than what we saw in previous years.

Part of that can be attributed to the COVID-inspired home buying frenzy, while the other underlying drivers have been constant for a while now.

There continues to be a supply glut, with too many buyers and not enough homes. Home builders have yet to catch up and don’t appear to be close to doing so.

When you throw in the need for more space due to stay-at-home orders, you wind up with the perfect storm.

This has made it very much a seller’s market in 2021, just as it has been in years prior. Ultimately, COVID just exacerbated an already dire situation. 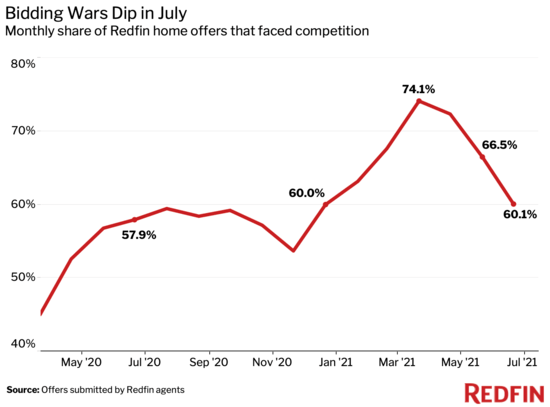 Now the “good news” for potential home buyers, with a major caveat.

Both bidding wars and listing prices have been falling of late, which could signal an end to the overheated housing market.

Redfin noted that just 60.1% of offers written by their own agents faced competition from other buyers in July.

However, despite July’s bidding-war rate being the lowest since January, it still exceeded the 57.9% bidding war rate seen in July 2020.

So though it appears as if things are moving in the right direction, they may in fact just be seasonal.

Here’s the problem. It’s all just relative to what has been an incredible period for home prices.

In other words, sure, the gains are moderating, but things like sale-to-list ratios are still above year-ago levels.

It really just tells us that home price appreciation is decelerating, not going away.

And to make matters worse, this can all be attributed to seasonal home price patterns.

Seasonal Patterns May Make It Feel Like the End of the Boom, Again 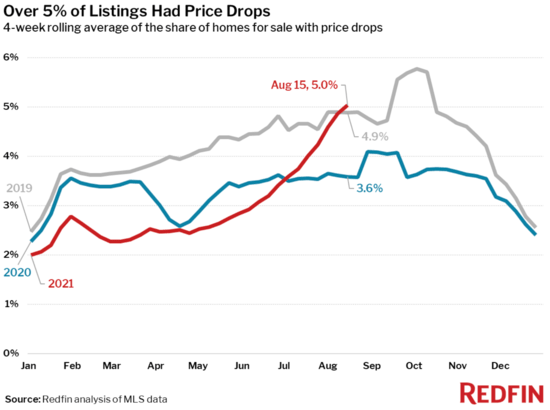 If you’ve been watching your local housing market, you might be hopeful that we’re returning to a period of normalcy. But don’t get your hopes up.

Each year, as we approach the end of summer and school gets back in session, the housing market tends to slow down.

This is a typical seasonal pattern that repeats itself each and every year, after the traditionally robust spring home buying season.

In short, April and May are the hottest months, then there’s an expected waning in home buying activity.

While we are seeing some of that, you still need to keep it in perspective. Home prices and bidding wars are only lower relative to the incredible numbers recorded over the past year.

Imagine Tesla stock trading at only $700 versus its $900 all-time high. Sure, it’s lower than it was, but still up something like 1,500% over the past five years.

With regard to home prices, they’re still achieving new highs. The only thing that might be trending down is the pace of appreciation.

And here’s the worse news – expect the housing market to heat up once again in spring 2022.

Read more: When will the housing market crash?

previous10 Big Mortgage Myths Proved Wrong, Once and For All
nextLendUS Review: An Easy Loan Process at Super Speed?