When Will the Next Housing Market Crash Take Place? All Eyes on 2024

It seems the most recent crisis and recovery has turned just about every single person into a guru on all things to do with home buying and selling.

I suppose part of it has to do with the fact that the massive housing bubble that formed a decade ago swept the nation and was front page news.

It also directly affected millions of Americans, many who serially refinanced their mortgages, then found themselves underwater, then eventually short sold, were foreclosed upon, or held on for the ride back up to new heights.

And now with home prices surging and real estate so expensive, it might be conjuring up not-so-distant memories for some that we could be in for another rude awakening. 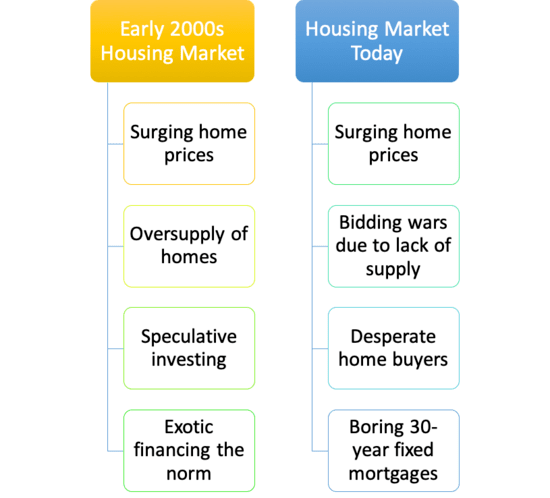 It’s a common conversation piece these days to talk about your local housing market.

Thanks to greater access to information, folks are scouring Redfin and Zillow and coming up with theories about what that home should sell for, or what they should have listed it for.

Neighbors are getting upset when nearby listings are not to their liking for one reason or another. What were they thinking?!

Others might obsess over their Zestimate or Redfin Estimate, as if it’s a stock ticker, constantly refreshing it day after day in the hope it has moved higher.

All of this chatter portends some kind of new bubble mentality, though it seems everyone is just basing their hypotheses on the most recent housing bust, instead of perhaps considering a longer timeline.

One could look at the recent run-up in home prices as yet another bubble, less than a decade since home prices bottomed around 2012.

After all, many housing markets have now surged well beyond their previous lofty levels seen about 15 years ago when home prices peaked.

For example, Denver area home prices are about 86% higher than they were in 2006. And back then, everyone felt home prices were completely out of control.

In other words, home prices were haywire, and are now nearly double that.

So if want to look at home prices alone, you could start to worry (though you also have to factor in inflation which will naturally raise prices over time).

They Say Bubbles Are Financially Driven

While surging home price appreciation can certainly give us all pause, that alone may not be a problem. Well, at least in terms of an impending crash.

They say bubbles are financially driven, and we’ve yet to see a return to shoddy underwriting.

I will say there’s been a lot of near-zero down financing, with many lenders taking Fannie and Freddie’s 97% LTV program a step further by throwing a grant on top of it.

This means borrowers can buy homes today with just 1% down payment, and even that tiny contribution can be gifted from someone else.

So things might be getting a little murky, especially if you consider the big increase in prices over the past four or five years.

However, most new home buyers need larger down payments to “win” homes these days when there are multiple bidders.

One could also argue that affordability is being supported by artificially low mortgage rates, which history tells us won’t be around forever.

There’s also a general sense of greed in the air, along with a feeling amongst homeowners that they’re getting richer and richer by the day. And that it won’t let up.

But When Will Home Prices Crash Again?! 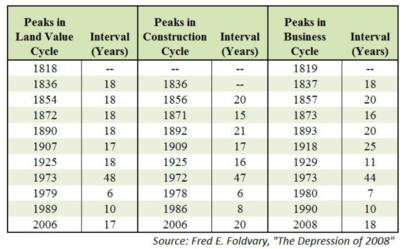 All of those recent home price gains might make one wonder when the next housing market crash will take place.

After all, home prices can only go up for so long before they drop again, right? Well, the answer to that age-old question might not be as elusive as you think.

The real estate market apparently moves in cycles that some economists think can be predicted to a relatively high degree.

While not a perfect science, there seems to be “a steady 18-year rhythm” that has been observed since around the year 1800.

Yes, for over 200 years we’ve seen the real estate market follow a familiar boom and bust path, and there’s really no reason to think that will stop now.

It puts the next home price peak around the year 2024, followed by perhaps a recession in 2026 and a march down from there.

How much home prices will fall is an entirely different question, but given how much they’ve risen (and can rise still), it could be a long, long way down.

And we might not have super low mortgage rates at our disposal to save us this time, which is a scary thought.

You’ll Never Get Back Into the Housing Market…

Another housing bust in inevitable, despite folks telling us we’ll never get back in again if we sell our home today, or don’t buy one tomorrow.

There are four phases to this predictable cycle, including a recovery phase, which we’ve clearly experienced, followed by an expansion phase, where new inventory is created to satisfy demand. This is happening now.

At the moment, home builders are ratcheting up supply to meet the intense demand in the market, with some 45 million expected to hit the average first-time home buyer age this decade.

The problem is like anything else in life, when demand is hot, producers have a tendency to overdo it, creating more supply than is necessary.

That brings us to the next phase, a hypersupply period where builders overshoot the mark and wind up with too much new construction, at which point prices plummet and a recession sets in.

The good news (for existing homeowners) is that according to this theory, we won’t see another home price peak until around 2024.

That means another three years of appreciation, give or take, or at least no major losses for the real estate market as a whole.

So even if you purchased a home recently and spent more than you would have liked, it could very well look cheap relative to prices a few years down the line.

The bad news is that the real estate market is destined to stall again in just three short years, meaning the upside is going to diminish quite a bit over the next few years.

This might be especially true in some markets that are already priced a little bit ahead of themselves, which may be running out of room to go much higher.

But perhaps more important is the fact that home prices tend to move higher and higher over time, even if they do experience temporary booms and busts.

So if you don’t attempt to time the market you can profit handsomely over the long term, assuming you can afford the underlying mortgage.

And remember, there’s more to homeownership than just the investment.

24 thoughts on “When Will the Next Housing Market Crash Take Place? All Eyes on 2024”