It Turns Out Housing Affordability Is Still Really Good

I’m the first guy to mutter that home prices are too high. That they’ve become too expensive, but if you look at the actual numbers, my grumbling might just be grumbling and nothing more.

It’s no secret that housing affordability has diminished over the past couple years thanks to rising home prices. But that doesn’t mean prices today aren’t affordable. It just means they’re less affordable.

For example, back in July 2013, I spoke about how affordability was set to fall off a cliff thanks to rising mortgage rates related to the taper tantrum.

And a few months later, the National Association of Home Builders reported that the Housing Opportunity Index (HOI) (a measure of affordability) experienced its biggest decline in nearly a decade.

A year later talks of a housing bubble were replaced with new handy phrases such as “affordability crisis,” which seemed to downplay the former.

But through all of that, it’s still apparently a good time to buy a home, in least in terms of affordability.

Home Prices in the Historical Context 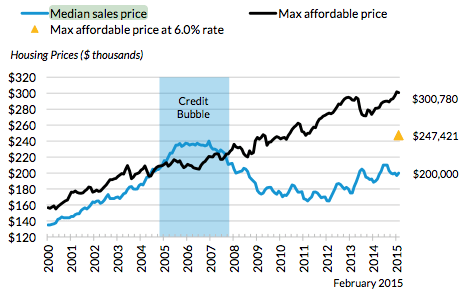 The latest numbers come from the Urban Institute, which noted this week that, “Home prices are still very affordable by historical standards.”

This despite the fact that home prices have increased tremendously over the past three years.

Not only that, but if mortgage rates were to rise to six percent, affordability would still hover near the long-term historical average.

They determined the maximum affordable price by looking at what a family can afford with 20% down and a monthly housing payment of no more than 28% of median household income at the prevailing Freddie Mac 30-year fixed rate.

So until then, party on! Oh wait, not so fast. That’s based on today’s home prices. If home prices keep rising, that maximum interest rate will need to come down some.

And most expect home prices to continue on their upward trajectory for the foreseeable future, though gains are supposedly expected to taper off at some point.

Still, the median existing single-family home price is only around $205,000, per NAR, and could rise to just over $300,000 at current interest rates and remain affordable.

If 30-year fixed rates did climb to 6%, the maximum affordable price would drop to $247,421, which still presents quite a premium above current levels.

Of course, affordability will vary based on where you’re looking to buy, so looking at national numbers might not do much good.

In some areas, like Los Angeles and the Bay Area, housing affordability is lower than it was back in 2000-2003.

But in other areas, such as Cleveland and Cincinnati, and even Las Vegas, affordability is still much better than it was back then.

There’s just one little problem. Affordability doesn’t seem to be the problem these days, at least not for everyone.

The problem is that there aren’t any homes for sale in areas where demand is the highest. So even if a family has all its ducks in a row, there’s nothing to make an offer on.