One Quick Reason to Avoid the 30-Year Fixed

While the 30-year fixed is the most common home loan program utilized by borrowers today, it might not be the most economical.

Aside from taking three decades to pay off your mortgage in full, you’re probably also paying a premium for something you might not even benefit from.

Are You Really Staying for 30 Years?

Most folks have trouble committing to something for 30 days, let alone 30 years. And when it comes to homeownership, this is no different.

Sure, you might think you found your forever home, but a year or two later, you could be itching to move on to greener pastures, or simply someplace else.

We move for a lot of different reasons, whether it’s due to a job relocation, a growing family, or other miscellaneous scenarios.

Whatever the reason, one thing is clear; homeowners on average don’t stay in their properties for anywhere close to 30 years.

So why take out a 30-year fixed mortgage and pay a premium for it? 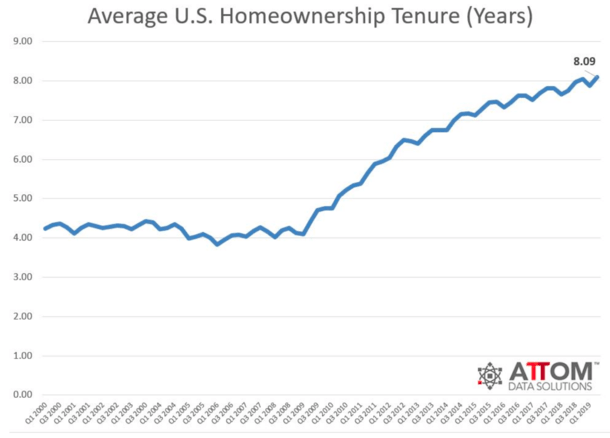 A recent report from ATTOM Data Solutions revealed that those who sold a home in the second quarter of 2019 had owned it for an average of 8.09 years.

It’s also much longer than the homeownership tenure seen prior to the Great Recession, where it averaged 4.21 years between the first quarter of the year 2000 and the third quarter of 2007.

But it’s still not even a third of the loan term of the 30-year fixed. In fact, it’s just over a quarter of the full loan term.

Here’s the problem – when homeowners opt for the 30-year fixed, which most do, they’re paying extra (in the way of a higher mortgage rate) for the safety and stability of a fixed interest rate for three full decades.

But as you can see from the chart above, very few homeowners actually stick around long enough to benefit.

Sure, some do, but it seems we’re becoming more and more nomadic these days.

The other day I was at the bank and actually overheard a woman who said she had owned her home for 53 years.

For her, a 30-year fixed may have paid off, assuming she locked in a low rate at the outset and rates increased over time.

But again, there’s another problem. When you take out your 30-year fixed, you’re essentially hoping it’s the perfect time to do so, ideally before interest rates increase.

Because even if you don’t sell your home early, if rates go down, there’s a good chance you’d benefit from a mortgage refinance.

This would once again nullify any benefit of taking out the higher-cost 30-year fixed.

Even if rates are low, as they are now, most individuals don’t expect further improvement.

So many of those who obtained their mortgages six months ago probably opted for a 30-year fixed loan thinking rates hit bottom.

These folks are now refinancing their 30-year loans that lasted about half a year, or roughly 1.6% of the intended loan term.

Now it might sound like I’m completely against the 30-year fixed. But it’s not quite that simple.

We have to consider the discount of alternative loan programs. If you opt for a cheaper ARM instead, such as the 5/1 ARM or the 7/1 ARM, just how much will you actually save?

These days, the answer might be not very much. Over time, the spread between interest rates on ARMs and the 30-year fixed fluctuate.

At times, you might be able to secure a rate that’s a half to a full percentage point lower.

But at the moment, this spread is only about .25% for the 5/1 ARM, and perhaps even less for the 7/1 ARM, depending on the lender.

So you might not even save all that much in terms of interest paid, and the difference in monthly payment could be pretty negligible.

Sure, it’s about $40 less per month, and more than $2,500 cheaper over the first five years of the loan, but it might not be all that noticeable.

And if you do happen to be one of those people who found their dream home, or a borrower with uncertain finances that can be tough to refinance, you could wind up with an expensive mortgage in the not-too-distant future once rates reset higher.

Five years can go by in the blink of an eye, so you certainly need a contingency plan if you take out an ARM.

Read more: How long do you plan to keep your mortgage?

previousAmazon TurnKey: Get Free Stuff If You Use a Realogy Agent
nextWhy a Low Down Payment Mortgage Might Be the Safer Move