Fixed-Rate Mortgages: How They Work

A “fixed-rate mortgage” is the most ordinary and uncomplicated home loan available to borrowers today. It is far and away the most popular choice for homeowners because of its conservative and affordable nature.

What Is a Fixed-Rate Mortgage?

As the name suggests, the interest rate on a fixed mortgage does not change at all during the entire duration of the loan term, which is typically 30 years.

This means borrowers don’t have to worry about their mortgage rates rising, which would cause their monthly payments to increase.

However, 30-year mortgage rates do come at a premium relative to other loan types in exchange for this assurance.

Let’s learn more about the features of a fixed-rate mortgage, along with key pros and cons.

Fixed Mortgages Are Easy to Understand and Surprise-Free

First off, fixed-rate mortgages do not have associated mortgage indexes, margins, or caps because they are not variable-rate loans.

Another key characteristic of the fixed-rate mortgage is that monthly principal and interest mortgage payments remain constant throughout the life of the loan, to the very last month when the loan is finally paid off.

Imagine if your monthly payment was $1,000 on a 30-year fixed-rate mortgage. Even if mortgage rates rise, your payment will not change.

Conversely, if rates go down, it may be possible to refinance to a lower interest rate.

In other words, there aren’t too many surprises with a fixed-rate loan, making it easier for the homeowner to sleep at night.

Of course, that certainty does come at a cost, namely, a higher mortgage rate relative to adjustable-rate options.


30-Year Fixed Mortgage Rates Are the Most Expensive 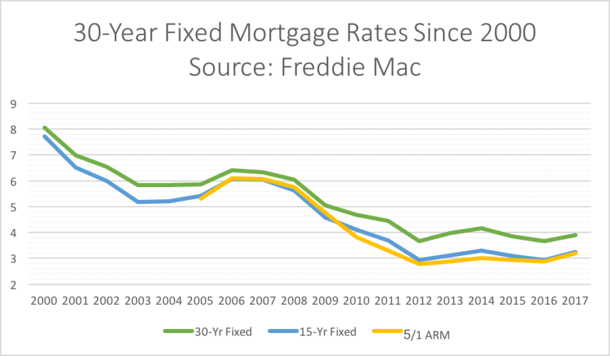 The chart above displays average 30-year mortgage rates since the year 2000, per Freddie Mac data.

While the 30-year fixed is definitely the most popular mortgage out there, it also tends to be the most expensive other than the 40-year mortgage, which isn’t too common these days.

In a nutshell, you get saddled with a higher mortgage rate because the lender is taking a risk by letting you lock in today’s rates for a full three decades.

They know mortgage interest rates can go up during that time, so they price some of that risk into the rate upfront.

However, a 30-year fixed might not cost much more than a 5/1 ARM, depending on the rate environment at the time you’re shopping for a loan.

This 0.75% spread is the cost of securing that fixed rate for 30 years. Or the discount of going with the ARM instead.

For some folks, that’s a small price to pay for a surprise-free mortgage. For others, it means leaving money on the table and paying more than necessary.

That higher rate also means your mortgage balance is paid off slightly slower than the low-rate option, which could be important if you’re trying to build equity and eventually refinance.

It’s very important to determine what type of loan is right for you early on in the home buying process, instead of having your loan officer influence that decision.

While the 30-year fixed is definitely the default choice, it’s not necessarily the right fit for all borrowers. So do your research beforehand! 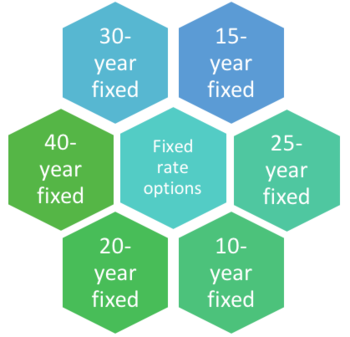 The next most popular term for a fixed mortgage is the 15-year fixed loan, which amortizes over fifteen years.

It bumps up monthly mortgage payments significantly, but reduces the amount of interest paid throughout the duration of the loan considerably.

The 15-year fixed has the potential to save you a ton of money and build home equity fast.

However, it’s often not affordable for many first-time home buyers (or even existing homeowners) because monthly payments are significantly higher.

If you want to compare the costs and savings, grab a mortgage calculator and prepare to be shocked at how much borrowers can save over the life of the loan with a 15-year fixed.

Many banks and mortgage lenders also offer 10, 20, 25, 40, and even 50-year fixed loans as well, though they are far less popular and widespread.

You may also be able to choose your own term, via programs like Quicken’s Yourgage, and through similar programs offered by other lenders.

If you want a certain term, just let them know and they might be able to accommodate you.

A shorter fixed term means a higher payment, but it also equates to a lot less interest and a home that is free and clear that much faster, assuming that’s one of your financial goals.

Some fixed-rate mortgages also feature interest-only periods, which allow homeowners to make interest-only mortgage payments during the first five to ten years of the loan term.

Once that period is over, the loan will recast to account for any reduced payments made during that period.

In other words, monthly payments after the interest-only period expires will be higher to compensate for lower payments made early on.

And you typically need to pay extra for this IO option, in the form of discount points, which can increase closing costs.

However, the mortgage is still considered “fixed” because the rate is not subject to change. It is simply recalculated to reflect the remaining number of months and the remaining mortgage balance. 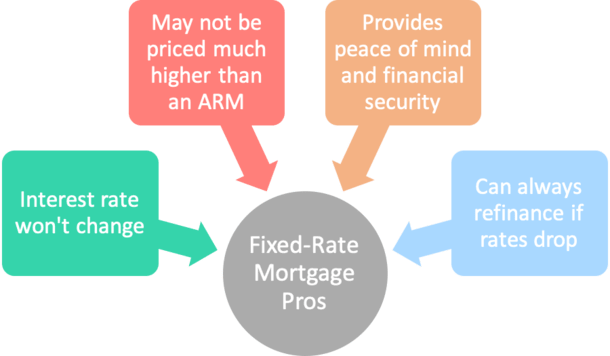 Fixed-rate mortgages are beneficial for a number of reasons, though the fact that your mortgage payment will never change is clearly paramount.

Meanwhile, fixed-rate borrowers can rest assured that their payments will not change under any circumstances.

Borrowers with fixed loans won’t need to worry too much about where the market is headed either, though it’s wise to monitor interest rates in case a sizable interest rate drop makes it favorable to refinance.

But generally, it’s a pretty stress-free loan choice, and one that’s favored by many government programs (FHA loans, VA loans) for its stability and clear-cut nature.

Simply put, the fixed mortgage is a good choice for the borrower who actually wants to pay off their mortgage, and plans to stay in the home (and with the mortgage) for the foreseeable future.

It could also be a good choice for an owner-occupied property you plan to rent out once you move. That way you can secure cheap financing upfront for the long-term. 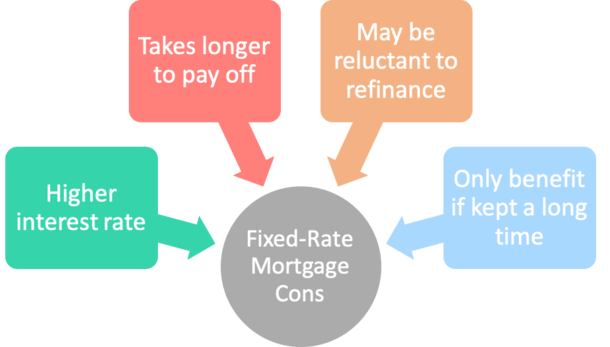 As mentioned, the only real negative aspect of a 30-year fixed-rate mortgage is the higher interest rate, although these days many fixed mortgages price fairly closely to ARM rates.

Typically, homeowners pay a premium to lock in a fixed mortgage rate, whereas adjustable-rate mortgages may be discounted, especially early on. That means you get a lower rate and payment.

For example, a 30-year fixed mortgage rate may be one percentage point higher than say a 5/1 ARM, but the borrower who goes with the fixed loan is banking on payment stability in exchange for a higher upfront cost.

The borrower with the ARM is essentially taking a risk that rates won’t rise in the future.

Another small negative associated with a fixed-rate mortgage is the idea that many homeowners will fail to refinance when a good opportunity comes around because they’re so obsessed with holding onto their low fixed rate.

Basically a homeowner with a fixed-rate loan may avoid refinancing in fear of losing that fixed-rate, whereas an ARM-borrower is always keen to shop around in order to save money.

A homeowner can also lose the advantage of a fixed mortgage if they sell or refinance within a few short years.

In that case, they could have just taken out an ARM that was fixed for the first five or seven years and enjoyed a stable rate at a lower price.

Finally, a 30-year mortgage lasts for, you guessed it, 30 years. Many people don’t want debt hanging over their head for that long.

So another negative is the time it takes to own that real estate free and clear. That lengthy time span also means a lot of interest is being paid to the bank, as opposed to staying in your bank account.

But all in all, fixed mortgages are a good choice for a wide range of borrowers because of the relative low risk and lack of surprise.

And with 30-year mortgage rates at historic lows, there couldn’t be a better time to obtain one for the long term.