Now that mortgage rates have jumped, it might be time to consider alternatives to the 30-year fixed, such as the once-popular “5/1 ARM.”

Everyone has heard of the 30-year fixed-rate mortgage – it’s far and away the most popular type of mortgage loan out there.

Why? Because it’s the easiest to understand and presents no risk of adjusting during the entire loan term. It’s also fairly cheap, or was…

But what about the 5/1 ARM? What the heck is that slash doing there!? While it might looks confusing, it’s actually pretty straightforward. And can save you money! 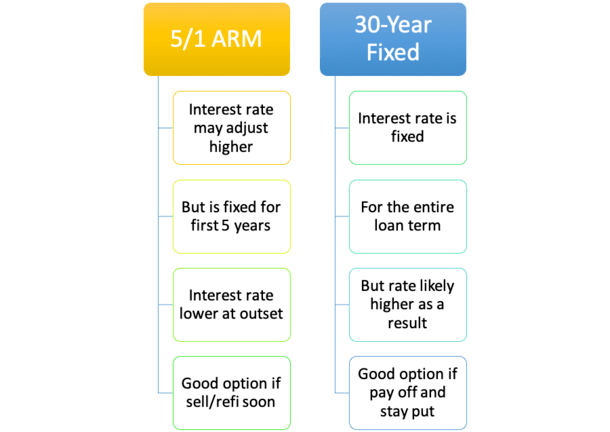 During years one through five, the interest rate never changes. If it starts at 4%, it remains at 4% for 60 months. Nothing to worry about there.

But after the first five years are up, the interest rate can adjust once annually, either up or down. That’s where the “1” comes in, as in one adjustment per year.

Whew! There you have it, the 5/1 ARM broken down into simple terms we can all understand. Oh, and don’t get hung up on that pesky slash.

While not as common as the 30-year fixed, it’s a pretty popular adjustable-rate mortgage product, if not the most popular. And as such, just about all mortgage lenders offer it.

It’s an option for conventional loans, FHA loans, and VA loans (but not USDA loans). So you won’t have any trouble finding it. This should make comparison shopping quite easy too. 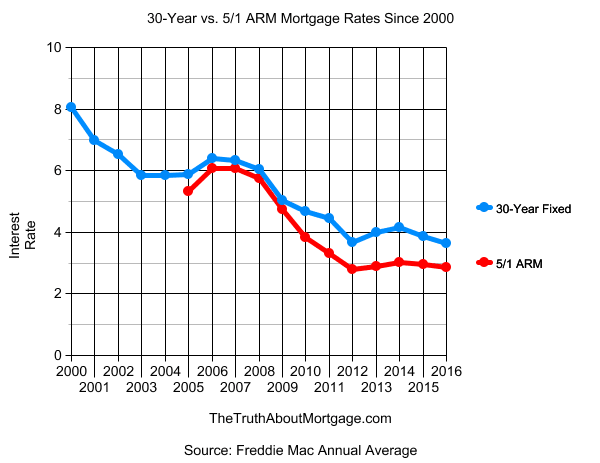 The biggest advantage to the 5/1 ARM is the fact that you get a lower mortgage rate than you would if you opted for a traditional 30-year fixed.

You get a discount because your interest rate isn’t fixed, and is at risk of rising once the initial five-year period comes to an end. Of course, if you refinance your mortgage at that time you can avoid the rate changing.

As you can see from the chart I created above, the 5/1 ARM is always cheaper than the 30-year fixed. That’s the trade-off for that lack of mortgage rate stability.

If the spread were only 0.25%, it’d be hard to rationalize going with the uncertainty of the ARM. Conversely, if the spread were a full percentage point or higher, it’d be pretty tempting to choose the ARM and save money for at least 60 months.

The Freddie Mac survey only covers conforming loans. The spread might be different for jumbo loans, depending on market conditions. And it may also be significantly understated.

Either way, take the time to compare lenders since rates (and loan payments) can vary considerably, just like fixed interest rates.


Let’s look at an example of the potential savings of a 5/1 ARM:

Assuming you can snag a 1% lower rate on the ARM vs. the fixed product, you could potentially save nearly $15,000 over the first five years, not taking into account tax deductions.

That’s a pretty big win, though you do have to consider what happens in month 61. Does the rate (and payment) on the ARM jump significantly at that time, and begin eating into those initial savings?

Or do you have a plan to avoid that, such as a home sale or refinance? As you can see, the savings can be tremendous, but there’s risk involved too as we won’t know where rates will be five years into the future.

This lower-payment mortgage may also free up cash to pay off credit card debt, student loans, an auto loan, or any other higher-APR debt you hold, or for home improvements.

You’d also pay down your mortgage faster because more of each payment would go toward principal as opposed to interest.

So you actually benefit twice. You pay less and your mortgage balance is smaller after five years (more home equity and a higher net worth).

It might not always be this good. In fact, you might only save money for the first five years of your 30-year loan.

After those initial five years are up, you could face an interest rate hike, meaning your 5/1 ARM could go from 3.50% to 4.50% or higher, depending on the associated margin, the rate caps, and the mortgage index.

And most importantly, the adjusted rate may not be affordable, which can lead to a lot of trouble.


5/1 ARMs Are Cheap But Will Likely Adjust Higher

Currently, both ARMs and mortgage indexes are super low, but they’re expected to rise in coming years as the economy gets back on track, which it will eventually.

And you should always prepare for a higher interest rate adjustment if you’ve got an ARM.

In fact, during the loan application process mortgage lenders typically qualify you at a higher expected rate to ensure you can make more expensive mortgage payments in the future should your ARM adjust higher.

To that end, qualifying shouldn’t be any easier relative to fixed-rate mortgages.

So that’s the big risk with the 5/1 ARM. If you don’t plan to sell or refinance before those first five years are up, the 30-year fixed may be the better choice.

Although, if you sell or refinance your mortgage within say seven or eight years, the 5/1 ARM could still make sense given the savings realized during the first five years.

And most people either sell or refinance within 10 years despite taking out fixed loans with 30-year terms.

The big question is where will refinance rates be when it comes time to make your move? And home prices.

If you came in with a low down payment and home values drop and it’s difficult or impossible to refinance, you could be trapped if you don’t sell your home. That’s the great unknown of going with an ARM – and trying to time the real estate market is nearly impossible.

If you do decide to go with a 5/1 ARM, or any ARM for that matter, make sure you can actually handle a larger monthly mortgage payment should your rate adjust higher. Paying the mortgage with your credit card isn’t a good strategy.

Also realize that refinancing won’t always be an option; you may not qualify if your credit score goes down or your income takes a hit, or refinance rates may be too expensive to justify a refi. It’s never a guarantee.

If you actually plan to pay off your mortgage, an ARM loan could be a bad idea unless you seriously luck out with rate adjustments. Or you serially refinance before the ARM adjusts and pay extra each month to shorten the amortization period.

Otherwise, there’s a good chance you’ll pay a lot more than you would have had you gone with the 30-year fixed rate mortgage.

Why? Because each time you refinance to another ARM, you’re getting a brand new 30-year term. That means more interest is paid over a longer period of time, even if the rate is lower. If you don’t believe that, grab a mortgage calculator and do the math.

However, if you’re a savvy investor and have a healthy risk-appetite, the 5/1 ARM could mean some serious savings, despite the potential of the rate changing, especially if the extra money is invested somewhere else with a better return for your money.

Just know what you’re getting into first with this loan type and how high the rate can climb during the life of the loan.

Your financial advisor probably won’t recommend it, but that doesn’t mean it’s not a good deal. In reality, a ton of home buyers could probably benefit from an ARM because they don’t hold their mortgages for more than a few years anyway. So why pay more?

Five years not enough for you? Check out the 30-year fixed vs. the 7-year ARM, which provides another two years of interest rate stability compared to the 5/1 ARM. The rate may not be as low, but you’ll get a little more time before that first rate adjustment.

Or go the other way and check out the 3/1 ARM, which gives you two less years of fixed-rate goodness but might come with a slightly lower interest rate.

As noted above, it depends on the spread between the two loan programs at the time you apply for a mortgage.

It can be quite minimal, just 0.25%, or more than 1% lower, depending on the interest rate environment and the lender in question. It’s very important to know the spread to determine if it’s worth the risk.

No, the five-year part just refers to the amount of time the interest rate is fixed. It’s still a 30-year loan. The rate doesn’t change during the first five years, but is annually adjustable for the remaining 25 years.

Can I get a 5-year mortgage?

I haven’t heard of a home loan with a term as short as five years, but that’s not to say it doesn’t exist, somewhere…

However, you can get a 10-year fixed, or simply pay extra each month to effectively pay off your loan in five years or less, if you wish to do so.

What happens when the first five years are up on my 5/1 ARM?

Your interest rate will become adjustable, based on the lender-assigned margin and the mortgage index it’s tied to.

At that time, you can do nothing and simply accept the new fully-indexed rate (and corresponding monthly payment), or refinance your loan into something new. Some homeowners may sell before the five years are up as well.

Yes, assuming you qualify for the refinance. You can start with an ARM and move into a fixed-rate mortgage later, or go from an ARM to another ARM if you wish.

Can I get another 5/1 ARM after the first five years are up?

You sure can, again, assuming you qualify. Of course, you have to consider if rates are favorable at that time to do so. Also note that you’ll restart the clock with a fresh 30-year term if you do.

Like any other mortgage, you can pay more than the amount due and whittle down your outstanding balance and loan term.

It could even be a good idea if you want a lower balance at the time your loan is first scheduled to adjust. For example, the smaller balance might make it easier/cheaper to refinance thanks to a lower LTV.

Is this a risky loan program? Should I just stick with a 30-year fixed?

This is an age-old question that can’t be answered universally. For someone who plans to pay off their mortgage in full, a fixed-rate loan might be a better call.

Conversely, if you plan to sell or refinance in a relatively short period of time, the 5/1 ARM can be a real money-saver. The key is having a plan and knowing the risks involved, namely that the rate can increase, sometimes significantly.

previousMortgage Rates Have Jumped. Just How Bad Is It?
nextDiamond Residential Mortgage Review: No Borrower Is Left Behind Thanks to Their Endless Menu of Loan Programs